Vaclav Havel’s historic speech to Congress is a reminder that we all bear responsibility for effecting change. 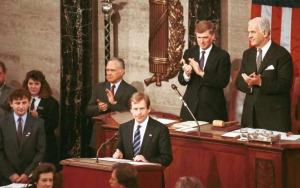 Thirty years ago, on February 21, 1990, the new president of Czechoslovakia addressed a joint session of the U.S. Congress in Washington, DC. Less than four months before, in a remarkable contrast to the position he had assumed as leader of his country, Vaclav Havel had been under arrest as a “subversive element” in his country under a Communist regime that was soon to come to a spectacular end.

Havel was greeted enthusiastically by the House and Senate as a leader of the Velvet Revolution which terminated totalitarian rule in his country and set it back on the path toward democracy. One of us (Palous) joined him in the House chamber for this historic occasion. It was a moment few of us, Havel included, could have imagined just a few months before. Havel the playwright, poet, and intellectual was now speaking to a rapt audience in the United States Congress. For Czechs and Slovaks, there was no clearer indication that their fate had changed for the better.

In his speech, Havel spoke admiringly of democracy in the United States. “[Y]ou have one great advantage,” he declared. “You have been approaching democracy uninterruptedly for more than 200 years, and your journey toward the horizon has never been disrupted by a totalitarian system.”

The American Civil War in the 1860s, of course, stands as a kind of exception to Havel’s claim. But compared to the experience of Czechs and Slovaks, whom Havel argued had experienced democracy for a mere 20 years at that point—between the two world wars and for the three and a half months after the collapse of the Communist regime—Americans have enjoyed a much more peaceful, stable and prosperous system of government, especially in the second half of the 20th century.

By contrast, Havel described the toll decades of imposed Communist rule had had on his country and others in the region.

The communist type of totalitarian system has left both our nations, Czechs and Slovaks—as it has all the nations of the Soviet Union, and the other countries the Soviet Union subjugated in its time—a legacy of countless dead, an infinite spectrum of human suffering, profound economic decline, and above all enormous human humiliation. It has brought us horrors that, fortunately, you have never known.

At the same time—unintentionally, of course—it has given us something positive: a special capacity to look, from time to time, somewhat further than those who have not undergone this bitter experience. Someone who cannot move and live a normal life because he is pinned under a boulder has more time to think about his hopes than someone who is not trapped in this way.

What I am trying to say is this: we must all learn many things from you, from how to educate our offspring, how to elect our representatives, to how to organize our economic life so that it will lead to prosperity and not poverty. But this doesn’t have to be merely assistance from the well-educated, the powerful, and the wealthy to those who have nothing to offer in return.

We, too, can offer something to you: our experience and the knowledge that has come out from it.

Havel’s remarks raise the following questions: What is this “knowledge” that Czechs and Slovaks possess? What can we learn from Havel 30 years ago for today’s world? Given our current state of affairs, it does not seem that we have heeded Havel’s wise words very well. Nor have we maintained the positive momentum that emerged from the miraculous year of 1989. Instead, democracies seem to be lacking in the confidence that our system of government is the best. Havel would have been in no doubt about that.

Indeed, the deprivation of freedom and democracy Czechs and Slovaks endured thanks to the Soviet-imposed Communist regime deepened their aspirations to regain their liberty, and their appreciation for it once regained. Having had a brief taste of democracy between the wars, Czechs and Slovaks wanted to savor that freedom again, this time ensuring that they would sustain it and not take it for granted.

Havel’s experience with totalitarianism and the knowledge he derived from it three decades ago are relevant to all who struggle against totalitarian/authoritarian tendencies in today’s more globalized world. That experience also resonates to this day in Czech-U.S. relations. It is a reminder that we must remain steadfast in protecting human rights together, that we must recommit to the field of education, and especially the teaching of history, in order to properly preserve the memory of what we have collectively passed through before.

In his speech before Congress, Havel emphasized the importance of “human responsibility.”

Responsibility to something higher than my family, my country, my company, my success—responsibility to the order of being where all our actions are indelibly recorded and where and only where they will be properly judged.

The interpreter or mediator between us and this higher authority is what is traditionally referred to as human conscience.

To appreciate the relevance of Havel’s words today, fast forward 30 years, especially in light of the wrenching impeachment process in the United States that largely broke down along partisan lines (with the exception of Mitt Romney in the Senate and several Democrats in the House). In these super-polarized times, finger-pointing and vicious attacks on one’s political opponents have become par for the course. Nastiness in politics is nothing new, but the spillover effects of our political leaders’ rhetoric and actions are rippling across society. The impact is felt not only within the borders of the United States, but also around the world. The model Havel extolled thirty years ago, the “shining city on a hill” that Reagan highlighted the year before in his farewell address, has lost its luster.

To state the obvious, America was far from perfect 30 years ago (or before) but it stood as an example to emulate for those who were suffering under the iron hand of Communism and totalitarianism. For all its flaws, the United States and the democratic way of life represented freedom, strength, and prosperity, especially compared to those countries living under Soviet influence and control. Czechs and Slovaks, as well as others in the region, realized that the propaganda and narratives they were endlessly force-fed by the Soviet apparatus about the United States were lies. As their countries opened up, America was looked upon as the world’s leader in freedom.

Recent surveys, alas, reveal that attitudes toward the United States have dimmed. Russia and China are competing for influence around the world and denigrating the very notion of democratic governance. The United States not only is failing to push back aggressively against such nefarious efforts but, through some disturbing actions and behavior of its own, is helping to narrow the gap between countries long known for their democratic system of government and those living under authoritarianism.

Were he still alive today, Havel undoubtedly would bemoan the loss of confidence among the democratic community of nations. He would despair over the nascent withdrawal of the United States from the global stage, a trend that did not just start under the current administration. He would view the rise of populism as a reflection of democracy’s failings to address the needs of all citizens and advance the greater good. And he would lament the shrinking sense of “human responsibility” on display among our leaders and average citizens.

Elites have come under frequent attack in the United States and elsewhere for being out of touch and leading their countries into situations of rampant inequality and corruption. They have become easy punching bags for demagogues and populists. In 1990, Havel defended elites, or the intellectual class, as he described them. “Wasn’t it the best minds of your country,” he asked rhetorically, “people you could call intellectuals, who wrote your famous Declaration of Independence, your bill of human rights, and your Constitution, and who, above all, took upon themselves practical responsibility for putting them into practice?” Havel’s words serve as a good reminder that we often remember things that fit with the narrative we want to advance and forget or deliberately leave out those aspects that run counter to our preconceived notions.

“When Thomas Jefferson wrote that ‘governments are instituted among men, deriving their just powers from the consent of the governed,’” Havel went on to say, “it was a simple and important act of the human spirit. What gave meaning to that act, however, was the fact that the author backed it up with his life. It was not just his words; it was his deeds as well.” We could certainly use more examples of that.

Havel’s speech is a reminder that we all bear responsibility for effecting change. Our words have consequences and our actions can have an impact—for better or worse. For the sake of democracy and freedom around the world, one hopes that Havel’s call resonates with all who care about the future. There is no linear path to democracy, nor is there automaticity to its sustainability. It requires hard work and a common sense of responsibility that seems increasingly in short supply these days. If we learn nothing else from Havel, we owe it to ourselves to remember that.

Vaclav Havel Library Foundation · 41 minutes ago
@HavelLibrary
Martin C. Putna, a literary historian, author of the book "Rus-Ukraine-Russia," will be our guest in Havel Conversations.⁠ Join us in #NYC next Monday for a talk if you wish to understand the current state of Russia & Ukraine.⁠ RSVP: https://t.co/esAfruI1ZD.
#VaclavHavel #truth https://t.co/HuLjQLa48r
View on Twitter
0
0