Czechs and Slovaks on Tuesday will mark 50 years since Soviet tanks crushed the “Prague Spring” democratic reform movement, while using the anniversary to point out similarities to the situation today. 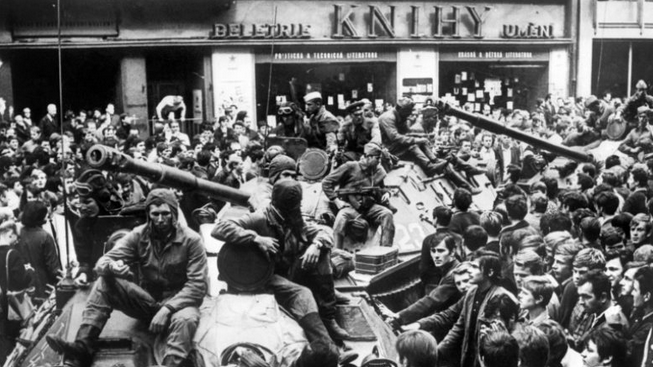 The burgeoning movement, led by Communist Party leader Alexander Dubcek, had tried to put “a human face on socialism” through democratic reforms to the totalitarian regime.

But on the night of August 20-21, 1968, Soviet soldiers backed by Bulgarian, east German, Hungarian and Polish units brutally put an end to the movement.

Around 50 Czechs and Slovaks were killed on that first day alone, while the total number of victims of the Soviet occupation is 402, according to historians.

The last Soviet soldier left the country only in 1991, two years after the Velvet Revolution that toppled totalitarian communist rule.

“Our citizens categorically rejected the occupation. And yet, part of the Russian public continues to think of the occupation as ‘international assistance’,” said Tomasz Peszynski, an activist from the pro-EU citizen’s initiative “Pulse of Europe”.

The NGO was among the organisers of a demonstration late Monday in front of the Russian embassy in Prague, where around 300 people waved banners with slogans such as “We will never forget”, “Stop Russian imperialism” and “Freedom is in the truth”.

“We penned a letter to Russian citizens in which we ask them to rise up against the current regime which continues to pursue an imperialist policy, just like during the Soviet era,” Peszynski told AFP.

“An intervention like the one 50 years ago is taking place today as well, but this time not with the help of tanks but propaganda, fake news and electoral influence.”

Protester Vaclav Bozdech attended the rally with a Ukrainian flag, while others carried the flags of the Czech Republic, the European Union and NATO.

“There are certainly parallels between the 1968 invasion perpetrated by the communist Soviets and the situation today where Russia is practically dominated by oligarchs,” Bozdech told AFP.

Many ceremonies, concerts and other gatherings are planned for Tuesday across the Czech Republic.

A tribute to the victims of the occupation will take place in front of the radio station in downtown Prague where around 15 unarmed people, mostly youths, died trying to prevent the Soviets from taking the building.

At night, local pop stars such as Marta Kubisova will perform an outdoor concert at Wenceslas Square in Prague.

In 1968, Kubisova openly took part in the Prague Spring and later sang the era’s most famous song “Prayer for Marta,” whose lyrics include: “Let peace remain with this country / Malice, envy, hate, fear and contention / Let these pass away.”

With the country back in the grip of loyal communist leaders who followed Moscow’s line, the powerful song was banned and Kubisova silenced — until the regime was toppled in 1989.

Czech public television will air special programmes about the events of August 21, 1968 all day Tuesday. At night the station will broadcast a speech by Slovak President Andrej Kiska.

His Czech counterpart Milos Zeman, an ex-communist who is known for his pro-Russian views, has however decided to stay silent on the occasion.

Zeman’s decision not to attend the commemoration ceremonies has been strongly criticised by right-wing opposition parties.

The president’s spokesman Jiri Ovcacek has replied that Zeman already “showed his courage by publicly opposing the occupation in 1968”.

“It’s a crucial subject for us: the pro-Russian president, the populists’ electoral win, the government backed by communists,” Peszynski said.

“We can see the harmful effect of Russian propaganda, which there is a lot of in the Czech Republic.”