CHICAGO — As I walked my dog near Wrigley Field the other night, the two of us stopped among the bars and the noise, and stood and stared outside 3408 N. Sheffield Ave. That address used to be the home of Stage Left Theatre. I started seeing theater there in 1995. 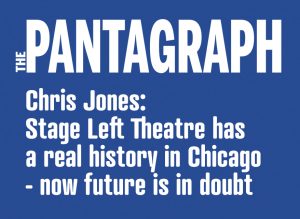 Stage Left was one of the great train-influenced theaters of Chicago: the roar of the “L” intensified, or punctuated, many a dramatic moment. It also used to be the perfect place to stand on the sidewalk outside and watch barhoppers wonder what was transpiring inside. At intermission, the action outside was often as interesting as the show.

In recent weeks, the CTA, which is building a flyover for the Brown Line, has pretty much swallowed the address entirely. The train has extracted its price.

As small Chicago theater companies go, Stage Left is one of the oldest. It has 36-year-old roots back to 1982, has encompassed several artistic identities over the years and yet, throughout that time, has been as fine a friend to the Chicago playwright as any local scribe could ask.

About 15 years ago, the Tribune spoke with a gathering of Chicago writers — the likes of Brett Neveu and Mia McCullough — and Stage Left turned out to be where most of them said they liked to work.

Stage Left was in the news this week after its board of directors put out an announcement saying that its artistic directors, Jason A. Fleece and Amy Szerlong, were both leaving, effective on Monday, as was its co-literary manager, Zev Valancy. Worse, the announcement said that Stage Left would not be producing any main-stage shows during the upcoming 2018-19 season, “so that the company can focus on the search for new leadership.”

That’s a strange statement, of course. You don’t close up most of your shop specifically to look for new leadership, since you then have no revenue flowing into your coffers that you might use to pay that leadership, and foundations and philanthropists tend not to fund shows that are not happening.

Audiences quickly move on to other companies. This is usually a euphemism either for internal disagreement or financial duress or both. Stage Left and its loose ensemble of artistic associates is to continue to exist — thank goodness — but now has no plans to produce mainstage shows.

“A lot of small arts organizations like us are going through financial struggles,” said the board member Marcey Abramovitz when I reached her by phone. “And the times are changing. Honestly, we wanted to take stock and take pulse. We are doing everything we can to come back and produce again. We owe it to the company and the folks who are still involved. Stage Left really is a part of Chicago.”

This has been a tough spring so far: American Theater Company has called it quits already, and there are fiscal troubles elsewhere in the sector. But this is a column about Stage Left.

This has been an important theater all these years. I watched it do a play by William Congreve in 1998 and “The Hardy Boys” in 1999. It survived the great venue crackdown by the city that year, and brought 3408 N. Sheffield up to code. There was Vaclav Havel in 2001, not to mention McCullough’s excellent play “Chagrin Falls.” I loved “Mrs. McKenzie’s Beginners Guide to the Blues” in 2002. The entire 2002-03 season was dedicated to writers living in Chicago. The year 2007 came with a special Jeff Award. In 2008, Stage Left produced its 100th show, “Omniscience.” By 2010, 3408 N. Sheffield was gone, a victim of a changing neighborhood, but the theater continued to produce at Theater Wit with new energy from the former artistic director Vance Smith. And new work was still its thing.

And this is not mere nostalgia. In 2017, Stage Left co-produced the work of Maria Irene Fornes with great success. And the recent Stage Left production of Robert O’Hara’s “Insurrection: Holding History” was one of the best off-Loop shows of the past winter.

I hope it returns — and I hope the same for Stage Left. But it clearly needs some help.

Chris Jones is a Tribune critic.