The fall of the Berlin Wall caused euphoria in the West. George H. W. Bush declared that “the end of the Cold War has been a victory for all humanity,” and Vaclav Havel predicted Europe would create “a new kind of order” where the powerful would no longer suppress the less powerful and disputes would no longer be settled by force.

How far away those days seem. What happened to this optimism? Why has the momentum toward democracy and international comity slowed? Why, as Madeleine Albright asks early in her new book, “are we once again talking about fascism?”

Who better to address these questions than, whose life was shaped by fascism and whose contribution to the cultivation of democracy as a stateswoman and private citizen is unparalleled? In “Fascism: A Warning” Albright (with Bill Woodward) draws on her personal history, government experience and conversations with Georgetown students to assess current dangers and how to deal with them.
Albright does this via an examination of cases in Europe and America from World War I through the present day. From this, some patterns emerge.

First, fascism flourishes alongside economic, social and political chaos. Take the classic cases of interwar Germany and Italy. The Weimar Republic was buffeted by the Great Inflation and the Great Depression, violent left- and right-wing uprisings and the humiliation of a lost war, together with a punitive peace. Interwar Italy was battered by high inflation and unemployment, and paralyzed for almost two years by strikes and lockouts as left- and right-wing gangs battled in the streets. These conditions resulted in citizens who were fearful and desperate.

While the turmoil in Europe after World War I was extreme, Albright notes similar dynamics in other places and times: Hugo Chávez’s recent rise to power was fueled by deteriorating social and economic conditions and growing inequality in Venezuela; Viktor Orban came to power as Hungary was experiencing the painful fallout of the financial crisis; and Vladimir Putin emerged as Russia was in the midst of economic and national decline similar to that experienced by interwar Germany. (During the 1990s Russia’s economy shrank by more than half.)

But problems only become opportunities for fascists and other antidemocrats if their opponents can’t or won’t address them. A second factor emerging from Albright’s cases is weak and divided oppositions. In interwar Italy liberal governments dithered while the country slid into chaos and the two largest parties, the Socialists and Christian Democrats, were more interested in defending the interests of their particular constituencies than democracy. In the Weimar Republic, the country’s largest party, the Social Democrats, was more committed to democracy than its Italian counterpart, but it too faltered during the Great Depression and was continually attacked by antidemocratic left- and right-wing forces. While their opponents fought among themselves and let their country’s troubles deepen, fascists offered voters simple explanations of their problems in the form of enemies like nefarious foreign powers or Jews, and simple solutions to them, namely replacing weak and unresponsive democracies with strong dictatorships truly responsive to “the people.” Adolf Hitler once explained: “I will tell you what has carried me to the position I have reached. Our political problems appeared complicated. The German people could make nothing of them. … I, on the other hand … reduced them to the simplest terms. The masses realized this and followed me.” 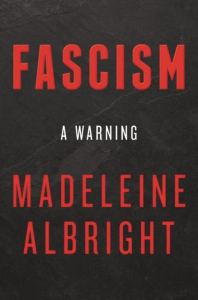 Albright finds similar dynamics in many other cases. In her native Czechoslovakia after World War II the weakness of the country’s president, Edvard Benes, facilitated Communism’s takeover. In modern Hungary, the corruption and dishonesty of the governing Socialist party paved the way for Orban. In Russia, Boris Yeltsin’s inability to halt his country’s precipitous economic decline or the rapacious raiding of resources by oligarchs eased Putin’s power grab.

Finally, Albright’s cases reveal a third factor in fascism’s rise: the connivance of conservatives. In both interwar Italy and Germany conservatives believed they could control fascism and use its popular support to achieve their own goals. In Italy King Victor Emmanuel III and in Germany President Paul von Hindenburg were persuaded by conservative advisers to hand power over to Mussolini and Hitler, respectively, even though neither had won electoral majorities.

So where does this leave us today? There are worrying parallels: Although the situation is not nearly as dire as the interwar period, Western democracy currently faces significant challenges. To avoid having these snowball into the type of crisis fascism feeds off, Albright hopes antifascists will learn from history. In the United States this means Democrats and Republicans must work together again to solve our country’s problems — and Republicans must not allow the fervidness of Trump’s supporters to blind them to the danger to democracy that he represents.

There are international parallels and lessons as well. During the interwar years Europe’s problems were aggravated by America’s withdrawal from the global stage; Albright worries that Trump’s isolationism, protectionism and fondness for dictators are eroding America’s ability to lead and help solve international challenges, deepening divisions within the West and emboldening antidemocratic forces.

Despite all this, Albright is hopeful. She ends her book referencing leaders like Abraham Lincoln and Nelson Mandela, who helped their countries move past periods of intense violence and division. Democracy’s problems can, Albright assures us, be overcome — but only if we recognize history’s lessons and never take democracy for granted. “The temptation,” she notes, “is powerful to close our eyes and wait for the worst to pass, but history tells us that for freedom to survive, it must be defended, and that if lies are to stop, they must be exposed.”