Spontaneous mass protests in the former Soviet state of Armenia have ended a deceitful power play by a longtime ruler to stay in office. In throwing off their fears, Armenians showed others in repressive countries how to ‘live in the truth.’ 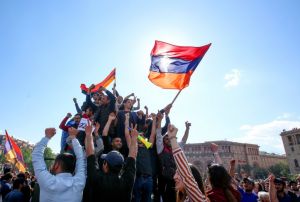 April 24, 2018 —In many countries of the former Soviet empire, people still live in fear of their regimes. In Armenia, a landlocked nation of nearly 3 million deemed “partly free” by Freedom House, that was certainly the case until this week.

Protesters could easily be killed, as they were in 2008. Two-thirds of people would not report a corrupt act if they witnessed one, according to a poll. Moscow keeps 3,000 troops in Armenia, whose oligarchs resemble those in Russia. And a quarter of the population has emigrated in the past quarter century under the dominant rule of the Republican Party of Armenia and its business cronies.

But on April 23, after 11 days of nonviolent protests in major cities, Armenians threw off their fears and began to “live in the truth,” as Vaclav Havel, the late Czech dissident, advised those living under the sham appearances of authoritarianism. They withdrew their consent to the effective one-party system and forced longtime ruler Serzh Sargsyan to step down after a blatant attempt to stay in power.

The size of the protests, which were largely leaderless and spontaneous, was so overwhelming that Mr. Sargsyan did not merely resign. He seemed contrite over his deceitful attempts to extend his tenure. “I was wrong,” he said in a statement, even admitting that the main opposition figure, Nikol Pashinyan, was right about the need for him to leave.

In recent decades, nonviolent civil resistance movements have reshaped much of the former Soviet empire, from Poland to Ukraine, as well as countries from Tunisia to the Philippines. Long-submissive people suddenly decided to no longer live a lie and instead chose to deny the legitimacy of repressive rulers. Armenia’s “velvet revolution” is particularly timely. In recent years, democracy in the former communist states of Europe has been in decline, according to Freedom House.

Armenians are a highly educated people. Yet nearly one-third live in poverty. In a global index on corruption, the country ranks among the worst. They have seen how Russian President Vladimir Putin has clung to power since 1999 by a mix of political tricks and repression. The protesters in Armenia said they did not want Sargsyan to “pull a Putin.”

Sargsyan is gone, but for now his party remains in power. The force of the mental shift away from fear by Armenians, however, has removed the pillars from under the regime. After rising up to live in truth, they may not be denied freedom.