Good evening and welcome — dear friends and supporters of the Vaclav Havel Library Foundation and the Bohemian Benevolent and Literary Association! 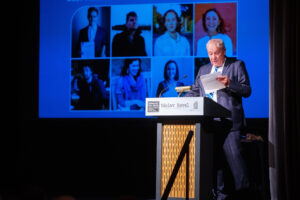 We are so happy to have you here with us tonight, and to participate in our most important annual event, the 2022 Gala – for which an inspiring name was chosen: “Following Dreams”, and during which two prizes will be handed over: the BBLA 2022 Award for Unparalleled Service to the Czech and Slovak Communities; and the 2022 Disturbing the Peace Award by which The Vaclav Havel Library Foundation annually recognizes writers who share Vaclav Havel’s passionate commitment to human rights and have suffered unjust persecution for their beliefs.

Tonight, we also celebrate the first ten years of the Vaclav Havel Library Foundation: a decade of conducting our mission to honor, preserve, and build upon the legacy here in the United States and throughout the world that Vaclav Havel created.

I still have in my memory all the events taking place ten years ago, on May 7 and 8, 2012 – opened by the “inaugural meeting the international advisory board of the Vaclav Havel Library” and resulting in the foundation of our 501c3 non-for-profit organization. It was the Vaclav Havel’s personal wish he asked me to fulfil during my tenure as the Vaclav Havel Library’s Director, started still under his watch, but unfortunately completed only after his passing away, in December of 2011s.

Three things must be highlighted in the context of this anniversary:

It was Milton Cerny, the founding president of American Friends of the Czech Republic who gave us the key legal support and drafted the statutes of our organization. And I am convinced, the intensification of cooperation between VHLF and AFoCR, represents now an important element on our journey from where we are now to the future.

It was Wendy Luers, in her capacity of President of the Foundation for a Civil Society and from the very beginning also an indispensable member of our board, who played and essential role to put the whole thing together.

And it is the fact that the BBLA, our older sister organization, which is at home in the National Bohemian Hall and has enabled VHLF to set the headquarters for its operations in this beautiful building, is going stronger than ever before – 131 years after its foundation!

There are two dear friends, essential members of our “team”, who passed away recently, and thus are remaining now just as silent partners in our on-going endeavors; who must be especially remembered tonight: Secretary Madeleine Albright and Count Riprand Arco.

And last, but least there are two persons, who I would like to recognize as key players in all our activities aimed at preserving the Vaclav Havel legacy so that it is not perceived just as a part of our contemporary history, but used creatively by the members of younger generations, assisting them in their task to find their place in the human world they will be living in in the future; the persons I have had always great pleasure to work with and whom I would like to thank from the bottom of my heart: Pavla Niklova, Executive Director of VHLF and Joseph Balaz, President of BBLA and also a member of VLHF Executive Board.

Pavla, thank you very much, you are doing a really great job, indeed! I admire your commitment to our cause, your creativity and energy you are putting into all the projects VHLF is involved in.
Thank you, Joseph! The BBLA under your leadership managed to make a successful transition from its somewhat complicated past to its current state and the mode of operation; bringing together different elements and traditions co-existing within the Czech-American and Slovak-American community; cooperating effectively with their neighbors in the Bohemian National Hall, Czech Consulate General and Czech Center, hosting Czech politicians visiting New York, and thus acting as a solid and reliable bridge over sometimes troubled waters of our trans-Atlantic communications.

So where are we – with all our declared commitments and wishes to remain faithful to the legacy of Václav Havel – in September of 2022? The world is literarily changing in front of our eyes. We have to rethink practically all our old beliefs, to reevaluate our values and reassess our expectations. The war in Ukraine, has not only brought us back to the times of ideological conflict between the East and the West, but has reopened questions we hoped that would never become again a part of our conversations: Could the nuclear weapons be used in the end in this bloody conflict? Can we still rely on the Charter of the United Nations as the unshakable foundation of the world order, the sovereign nations-states are parts of today? What will prevail in the decades to come in the realm of global politics? Will it be political realism driven by the “national interests“ of the most powerful players on the global stage? Or will it be the fundamental values built into the very concept of global, planetary mankind – the dignity of all human beings inhabiting this world and freedom of our open societies? The values, that seem to be challenged today in the deepening competition between the world’s democracies and autocracies? What Vaclav Havel’s comments and advices would, if he lived today? What would be his actions?

I had a privilege to know him for decades: before, during and after our Velvet Revolution. We experienced together all those, sometimes depressing, sometimes surprisingly positive transformations taking place around us, in our homeland in the heart of Europe: after the Soviet-led invasion of 1968, in 1977, when Charter 77 movement came into existence; during the Velvet Revolution in 1989; in the years which followed, when our return from our Babylonian captivity in the Soviet Empire to the world community of democracies has begun and brought us where we are today.

I cannot say what Vaclav Havel would think and do today, because I simply don’t know. There is, however, one crucial thing I am quite sure about: our dialogue that started when I was still and adolescent, trying to cope with the consequences of Czechoslovak “normalization process” in 1970s, would continue, as well as our common search for meaningful and effective actions to be taken under the given circumstances, learning from our mistakes, trying to turn our experience being made in these, often bizarre and absurd hermeneutical exercises, into a new knowledge about ourselves; actions consistent with our basic values and principles; actions increasing our capacity for self-understanding and enhancing mutually respectful communication with all others who happen to be around.