Source: Radio Praha  www.radio.cz / By Ian Willoughby /
The British philosopher Roger Scruton began giving underground seminars at the homes of Czechoslovak dissidents in the late 1970s. He was eventually thrown out of the communist state but the clandestine network he contributed to remained in place until the Velvet Revolution, when several of its “graduates” helped shape the new democracy.

This week Scruton was back in Prague for the Forum 2000 conference. It was there that I asked the renowned Conservative thinker what his recollections were of his first visit to the city. 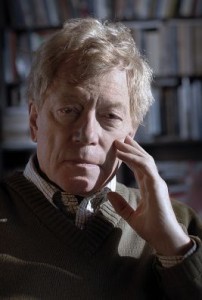 “There was the Polish pope, they had this revival of religious feeling, a sense that something was changing, the ground was beginning to tremble.

“So coming from there I came as though already animated by the sense that something might change. But of course the immediate effect stepping off the train from Krakow at the Main Train Station here was of total silence.

“That was the thing that most impressed me. Everywhere was silent. If you went to a bar or restaurant people could mumble or whisper, but there was no real noise. The noise of human life had been extinguished.”

“People like Václav Havel used to go to them. That was the older generation. But they weren’t open to the general public because of the risks involved.

“But then Julius Tomin, who was himself not really fully part of a university but had acquired an interest in classical philosophy, set up his own seminar and opened it to people.

“He tried to get in touch with people in the West and for the most part his pleas for help were ignored. But one of them was picked up by Kathy Wilkes, my colleague in Oxford.

“She decided, I’m going to go and see this guy and see whether there’s something we shouldn’t be doing. She came back fired up and said to herself, I’m going to get my colleagues to go and give lectures and see if this doesn’t make a difference.

“We were all recruited by this passionate woman who wouldn’t accept no for an answer. So we all went.”

“My first experience was one of being obstructed by the police, who were keeping vigil over Tomin’s apartment.

“I got past them and managed to give my talk, and got to know especially the young people there. I was very touched by their situation.

“What happened was back in England we got together and said, What shall we do about this? We set up a proper network underground, very carefully and patiently over many years, so that it wouldn’t be easy to disrupt it.”

Did many of the Czech dissidents share your Conservative outlook? Or were they kind of shaped by the communist environment even if they were opposed to communism?
“Let’s put it this way, the Jan Hus Trust that we set up and the underground university that we organised was not a political organisation.

“It was conceived on the traditional model of British education, that there might be a possible difference of opinion.

“Of course I’m a well-known Conservative, but I didn’t do any teaching of that. Perhaps I might have once or twice explained to people what conservatism is, but my main interest was in teaching them philosophy.

“It is true that people here were intrigued by what it is to be a Conservative, because it was not a tradition they had, and certainly not a tradition of calling yourself that. That’s a very English or Anglo-American thing.

I read a quote from you in which you said that Havel never agreed with anything that you wrote or said. What particular issues did you clash over?
“Did I say that? He was a Social Democrat who believed in the role of the state as a humanising force, as something that would set an example and also guide society to a more just and equal future.

“So he retained those old Social Democrat ideas and about that I disagreed with him, I suspect.

“I see the necessity for the state, but I’m much more interested in building civil society as something independent of the state.

“Interestingly enough, that’s what exactly what Havel himself was doing. When he ascended to the Castle it wasn’t really as part of the state. It was as if the civil society had come out on top.”

Getting back to the philosophical seminars, how did it work in terms of language? Philosophical language is difficult and I expect a lot of those people of that generation wouldn’t have had great English.
“Yes, that was a great problem, language. But people worked hard. We sent in literature in advance, in English or German, because people were quite fluent in German.

“In the seminars someone would translate for us. And after a while this language difficulty became much less urgent, because people had picked up the technicalities.

“And the broad range of interests meant that people learnt to improvise around each other’s way of looking at things.”

How did your underground teaching here come to an end?
“My experience came to an end in 1985 when I was arrested in Brno and thrown out.

“I knew that I was going to be arrested. I just had some further things to do, some people to meet, and it didn’t matter that I was arrested because we’d got things so well set up by then that we could communicate with all our friends without trouble.”

After 1989 some of your former students entered public life, entered politics. I’m sure you must have watched their progress with interest.
“Yes, it was wonderful to see. We didn’t expect 1989. At least I didn’t – I thought we had to plan for communism going on forever. We still had a duty to teach what we could.

“But of course after 1989 people from our network… Havel of course was always in contact with us. But also [Petr] Pithart, [Ján] Čarnogurský, they were major parts of our network and were immediately in high office.

“Also [Jan] Ruml, who became home minister, and Jiří Schneider, who did a degree through us underground. Milan Uhde, who was minister of culture. In fact lots of ministers came out of the network that we had created, with the kind of inspiration that we had helped them to acquire.”

“But one thing you can be certain of is that whoever is president and whoever is prime minister, they don’t get on.

“The power networks are very corrupt, obviously. But also power is much more important for them than any serious conception of the nation’s future. And that has been very depressing.”

After all these decades spent with Czech people, how would you characterise Czechs as a nation, if you could?
“The Czechs are very close to us English in some respects. That is to say they are ironical, even cynical, self-deprecating.

“They’re not easy to deceive and they seem cold on the surface, but they also have this quite sturdy instinct for their own country, and for their home. They’re not people who are going to allow things to be taken away from them easily.

“That is rare in modern Europe and it distinguishes the Czechs from the Germans.”

As a philosopher of aesthetics, how do you view the way Prague has changed over the decades?
“Well, I’m instinctively hostile to Modernist ways of building. And unfortunately the new towers scattered around Prague are of the worst kind. They’re simply horizontal slabs built one on top of the other.

“I think most Czechs think that too. I’ve never heard anybody in Prague praise these developments.

“But on the other hand the Czechs have really tried to tidy up their city and they do take pride in it. They are a very aesthetic nation and perhaps architecture is one of their great achievements.

“Why does everybody come to Prague? It’s because it’s one of the architectural jewels of European civilisation. And that wasn’t done without the Czechs themselves being part of it.”

Tell us about your novel Notes from Underground, which has just come out in Czech.
“Looking back over my experiences in the 1980s it all came together at a certain point, very recently, in my mind in the form of a love story set in the underground university and among young people who had been deprived of all opportunities.

“Of course, love was a very important thing in those circumstances, because it was the one aspect of human life in which you were prepared to make a sacrifice. Because in every other aspect sacrifice was just too costly.

“So I took the story of two people who were prepared to make sacrifices, but unfortunately their sacrifices don’t coincide. I used it really to evoke the atmosphere of those days.”

Did you run it by any Czech friends for authenticity?
“Of course, I tried it out on one or two Czech friends. One of them wrote me saying, Reading your book was like coming home. Which is I think the nicest thing that could be said.”