An interview with Michael Žantovský, a Czech diplomat, author, the current Director of the Vaclav Havel Library and president of the Aspen Institute Prague. Interviewer: Agnieszka Pikulicka-Wilczewska.

AGNIESZKA PIKULICKA-WILCZEWSKA: In light of the Ukraine crisis and the refugee crisis, do you think that the Visegrad countries have any special role in addressing the challenges Europe is facing? 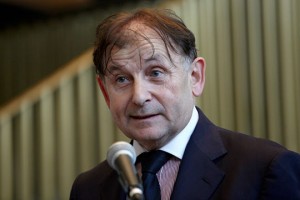 MICHAEL ŽANTOVSKÝ: I have always believed that there is a role to play for the Visegrad countries, and that was the idea when the group was formed 25 years ago. And I think we may have missed a chance to speak as a group during the accession negotiations before entry into the EU because we do share a great deal of common history and experience, especially in recent times with the totalitarian regimes and so on. It was always my impression as well as Vaclav Havel’s, that this gives us a very specific body of experience that could be used to enrich the European project. That did not happen then. Only now, when the EU is obviously in time of crisis, do we seek to come back together and pursue our common perspective on some of these problems. It is maybe a little unfortunate that the catalyst is the migration issue, and that the V4 governments came across as opposing some of the EU proposals. Because of time constraints and significant media attention it made it seem as though the V4 governments were only negative about the migrants. I think it is a pity that the V4 did not stress the agreement with the general need to help with the refugee problem and only concentrated on opposing the quotas. But that’s now behind us. In general I do think that the countries of Central and Eastern Europe have many preconditions for common positions and they should be able to voice them more forcefully, the same way as the Nordic group does or in the past the Benelux group did, and to an extent the Latin countries as well.

The V4 countries’ political scenes have been to some extent dominated by Euro-skeptical and nationalist forces. Why do you think we have this phenomenon?

Well, it is not a phenomenon of long duration. I would argue that for the last ten out of 15 years the political scenes in the V4 countries were dominated by pro-European groups. Now we seem to be in a time of a partial reversal, but I think we should be careful to differentiate between political groups that are critical of some of the current developments in Europe – because there are many such groups all around Europe these days – and between groups that are clearly anti-European. I would not go as far as to say that the current government in Poland, for example, or the current government in Hungary are anti-European. I would say that they are clearly critical of the current state of the EU, but today most people are.

You were the participant and the witness of some of the most important events in Eastern Europe in the past couple of decades, but you also had a chance to watch the region and the Czech Republic from a distance, having served as the Ambassador to the US and Israel. What do you think are the most significant changes that have taken place in the region and in the Czech Republic in the past 25 years?

The changes are enormous and that holds for the whole region. We are stable, democratic and quite prosperous countries. None of this was the case 20 years ago when we started the transformation. In many respects we are no different today from our neighbours in Western Europe, which, again, was not the case 20 years ago. Even the economy; the Czech Republic is doing better in terms of GDP than some of the old EU member states. So the differences between us and the “old Union” are smaller today, but together with the benefits of the European integration we have also invited some of the problems. And that is life, one always goes with the other.

Talking about changes, what does the general public in the Czech Republic think about the Ukraine crisis and Russia’s more general confrontation with the West?

I believe most of the people are aware that there are clear differences between the political system today in Russia and the political system in our part of Europe, and that some of these differences obviously lead to conflicts. They are also aware that historically Russia has also presented a problem because of its size, its power and its different political thinking to our part of Europe. It is true that today in the Czech Republic we also have groups that are more understanding of Russian policies and are voicing more pro-Russian views, but I would say that they do not represent the bulk of public opinion.

And how about the Czech public’s view of Vaclav Havel’s legacy? In Europe he is usually seen as a symbol of democracy, freedom and human rights. Is this perception similar in the Czech Republic?

It is all about these things, but also other ones. Many people speak about freedom, democracy and so on. But what made Havel quite unique was that he also spoke about our shared responsibility for maintaining freedom and defending democracy. He spoke about behaving responsibly as individuals and as societies. And I would argue that some of our current problems stem from the fact that the political classes have not really behaved responsibly, and that has brought some of the problems that you have mentioned. For that reason the legacy of Vaclav Havel may be more topical today than it was ten years ago.

Is Havel’s legacy being questioned? And if so, is it questioned by young people or people disillusioned with what happened in the past 25 years?

Of course he is an object of criticism, sometimes a very negative one, by political groups with different perspectives, but for the young generation, I would argue, it is the contrary. What we are witnessing is an increased interest in Havel and an increased interest in the stream of politics which is not concerned with just day-to-day problems, but that is aspiring to root politics in a moral dimension, in understanding politics as an expression of one’s own responsibility for our future.

What do you think would be Vaclav Havel’s advice to today’s Europe in crisis?

You can find what he thought about Europe in some of his speeches from the turn of the century. I think that his advice would be to go back to the basics and to reexamine the ethos – he used that word in his writings about Europe – of the European project and try to appeal to the citizens to accept it. If we only speak about Europe as a mechanism than I am afraid it will not inspire much enthusiasm among the young people today.

Do you think Brexit will happen?*

I have no idea, I think there is a realistic danger of that happening. The polls are very even, but I think that even if Britain stays in Europe, the problem is about reviewing its relationship to European institutions and maybe also the relationship of other European countries to the EU.

Is Czexit is possible?

Michael Zantovsky is a Czech diplomat, politician, author, journalist, lyricist and psychologist. He is the current Director of the Vaclav Havel Library and president of the Aspen Institute Prague. He was among the founding members of the movement that coordinated the overthrow of the Communist regime. In January 1990 he became spokesman, press secretary, and advisor to President Vaclav Havel. He was later the Czech ambassador to Washington, Tel Aviv, and London. Elected to the Czech Senate in 1996, he had spent six years as the chairman of the Senate Committee on Foreign Affairs, Defense and Security. He has combined a career in politics and foreign service with work as an author and translator into Czech of many contemporary British and American writers.

*The interview was conducted during the 2016 Prague European Summit, before the Brexit referendum.

Vaclav Havel Library Foundation @HavelLibrary
1 day ago
Many of you have guessed correctly: it is indeed the artist and illustrator Peter Sis who's our next guest in #HavelConversations. Join us March7 for an inspiring Zoom conversation with the author of The Flying Man tapestry. RSVP: https://t.co/Am3AnZsHzB. #Vaclavhavel #visualart https://t.co/FLwOjGIg39
View on Twitter
0
2

Vaclav Havel Library Foundation @HavelLibrary
2 days ago
As we prepare our spring edition of #RehearsalforTruth Theater Festival, we'd like to invite you to see "AI:When a Robot Writes a Play," composed of dialogues generated by #AI. Really. Feb 26 here: https://t.co/h6ZTdslRJw. Check it out. What would Havel think? #culture #arts https://t.co/As3M7RTxsH
View on Twitter
0
2