Struck as a PhD student by the philosophical language used by Václav Havel in his famous 1990 speech to the US Congress, Aviezer Tucker went on to write The Philosophy and Politics of Czech Dissidence from Patočka to Havel. More recently Tucker, whose wife is Czech, has turned his attention to what really happened when communism fell at the end of the 1980s. We discussed his latest book The Legacies of Totalitarianism – and his call for a new kind of dissident today – when the Israeli-born political philosopher visited our studios recently. But first I asked the Harvard academic to outline the ideas of Jan Patočka, the great Czech philosopher and Charter 77 spokesman, who died after a lengthy StB interrogation. 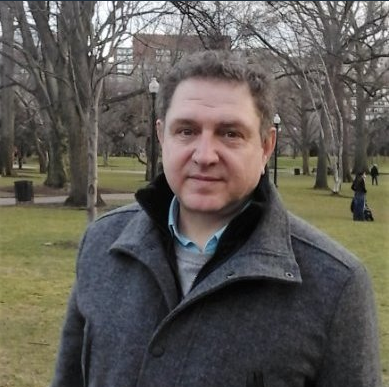 “To live in truth meant for him a kind of idealised life in the Greek polis, where people constantly argue and have Socratic dialogues. You can’t do that unless you have human rights, and of course you didn’t have human rights.

“Modern humanity was lost in a kind of production, reproduction and consumerism.

“As you know, consumerism was the basic ideology of the Czech regime in the 1960s and 1970s, not so much communist ideology – it had become discredited it the 1950s.

“The question for him was, How do you break this hold of alienation on humanity? And his answer was, From self-sacrifice.

“That’s why he thought that he had a double duty – both to himself and to his nation or to humanity.

“To himself, self-sacrifice, though it had a political goal, actually had an ulterior motive, which was to obtain authenticity, or some kind of mystical union with the universe.

“The other goal was a social goal, which was life in truth – to actually practice this kind of life of arguing and debating that allow us to be properly human beings. Because human beings are the only animal that has a concept of truth.”

You mention life in truth, which is a concept many people would associate with Havel. How much did Patočka’s philosophy influence Havel?

“It crucially influenced Havel. There is no doubt that many of Havel’s ideas and texts, like The Power of the Powerless and Politics and Conscience owe very much to Patočka.

“What is interesting is that Patočka owes much of his own philosophy to Martin Heidegger. Heidegger, as people know today, was an active Nazi.

“It is interesting that Havel neutralises the negative elements in the philosophy of Heidegger.

“Because for Heidegger, human authenticity was entirely negative. It meant you are not inauthentic, you are not alienated.

“But what it actually means is something that he left entirely open. And then when he actually made his own choices, the result was fairly ridiculous.

“What Patočka and Havel took from Plato, which Heidegger didn’t, was a concept of the soul, a concept of life in truth in a polis, of debate, of human rights.”

Havel was frequently referred to as a “philosopher king”. Was he really a philosopher? I know he used philosophical language, but is it right to consider Havel a philosopher?

“The concept of a philosopher in the West, or what we used to call the West, was that of an academic.

“Havel definitely was not an academic. Havel’s books don’t have footnotes. Havel was not updated to the latest debates about political philosophy in Harvard or Yale.

“Havel did know the political environment in which he existed much better than any of the political theorists in the West, who didn’t experience what it was actually like to live in late totalitarianism – in a period that did not have the Gulags and mass murder, but attempted to control people by using consumerist carrots and sticks, by making them lose their jobs, their houses, their children’s education, but not their lives.

“He understood the tendency of people to become alienated from themselves, to lie to themselves in order to become part of the system.

“In that respect, I think his contribution to political theory, to understanding late totalitarianism is pivotal.

“And it’s much more important than the works of people who read and wrote many more books with many more footnotes.

“What he understood was the environment where he was. And he used conceptual tools, from phenomenology, from Patočka, Plato and other philosophers to try to understand that environment and write in a popular style, so that it would be accessible not just to academics.

How did his philosophy prepare him for the reality of post-communism? Was he equipped to deal with it?

“Well, that’s a bit more embarrassing. Havel’s theory while he was a dissident was that you build the proper house of humanity, or the proper political house, by making good bricks.

“If people are virtuous and authentic and moral, they will create a great state.

“Now they can’t create a great state, because they are prevented from it. But in the meanwhile what we can do is create great people, create a good community.

“Then there will be what he called an existential revolution and then everything will be great. That’s not how history turned out.

“His conception of democratic policy is not that different from, say, that of Thomas Jefferson, who also believed that we have to build a great republic by having great people.

“But the opposite concept, the concept that underlies the American constitution, is that people are not virtuous and they’re not going to be virtuous. They’re corrupt – they always will be corrupt

“What you need to do then is construct institutions that will transform the greed, the power-hunger, the narcissism – to refer to contemporary politics – of people into political virtue.

“You do that by creating a balance of power between those institutions.

“Havel was completely unprepared to construct institutions, because as a dissident he never had any experience of constructing institutions, of managing anything more than a samizdat publishing house.

“When the time came he didn’t know how to construct institutions that would neutralise the legacies of totalitarianism that still exist in the minds of people, long after the regime is dead.”

Last year you published The Legacies of Totalitarianism. I was reading that you posit that what happened in the late period of communism was that the elite kind of adapted and continued to be the elite after the fall of communism.

“Yes, very much so. I believe there was much more continuity after 1989 than most people believe.

“Even though the regime is gone, its legacies are affecting everyday life.

“Democracy in that respect was a side-effect or unintended consequence of what I call the adjustment of the rights to their interests.

“That is, the second generation Communist elite inherited from the revolutionary generation – the people who communism – a set of rights.

“They didn’t inherit a group of rights that were of much interest to them: namely property rights.

“Mostly they could not bequest whatever wealth they had created for themselves to their children, because there were no property rights.

“Their interest was to transform the kind of liberties that they had into property rights proper.

“Imagine that you are squatting in a house. You can enjoy the house, you can do a lot of nice things for yourself – but you have no certainty that next week you will still be able to live there. Because somebody could take it away from you.

“The Communist elite’s privileges were very much like those of squatters. They could enjoy them while they lasted, but at any time there could be some kind of political shakeup and they could find themselves without the privileges to which they had become accustomed.

“Most importantly, it was very difficult to bequest those privileges to their children. Unlike the revolutionary generation, they had normal families and they cared for them. It was very important for them to create those conditions.

“They had an interest in property rights, in privileges, not in opening the market for competition.

“So when the time came, when the force of the regime weakened, when they stopped enforcing the rules of the regime on each other – because there was nobody else to force it on them, they forced it on each other – they simply established property rights where they previously had squatting rights. And the whole edifice of communism collapsed.”

“Well, many of them did. We can distinguish two groups of countries.

“One group of countries, like the Visegrad countries, the Czech Republic, Slovakia, Hungary, Poland, and the Baltic countries, had a replacement of elites in politics, in the media, and sometimes new elites emerged when they worked for foreign companies or in small businesses.

“In other countries – Russia, Belarus, Ukraine and so on – there was a continuity of the elites. That is, whoever was running the country in 1989 or 1991 continued to run it afterwards.

“The front row leaders moved to their country houses but it is exactly the same elite.

“I argue that if there is no change of leadership, at least in politics and in the media, we cannot talk about post-totalitarianism. It is still the late totalitarian period, even if there is a geo-political re-alliance, even if people can leave the country.

“What you will find is that in countries like Romania post-totalitarianism only emerged about 10 years after the so-called revolution of 1989, when there was for the first time a change in the political elite.

“In countries like Russia it went through a cycle. In the 1990s it looked like there was some change in the elites and then there was a restoration, pretty much like, let’s say, in France in 1815 after the Napoleonic Wars.

“The same elites just come back and recapture power, so there as a kind of cycle.

“The false assumption of many political theories in the 1990s was that there was this kind of ineluctable process with a teleology, with a purpose, that we were all going to be liberal democrats with a rule of law; it may take longer, it may take shorter, there may be birth pangs, but that’s where we are going.

“That was a mistake.

“And even there democracy, as we can see today, is pretty fragile.”

And you believe that today there is a need for a new kind of dissident?

“Yes. I believe that especially today, when we have this kind of dichotomy between corrupt elites and populist xenophobia, that’s exactly the time when we need dissidents to come back and tell truth to power, which was the original function of dissidents.

“We need people who would be able to tell the populists that their protest against the elite is correct, but xenophobia is really not the answer.

“They need to tell the elites that their role is not to steal but to manage, and to offer a third alternative between those two horrible choices of the existing elites and the populists.

“We can see in countries like Hungary and Poland, where the revolt against the elites was in my opinion completely justified, that replacing the old Communist judges is long overdue, if anything.

“It’s time to have a pluralistic society with competing elites, which underlie democracy.”

From everything you’re saying I’m not getting the feeling that you’re optimistic for this part of the world.

“Well [laughs], if there’s one thing we’ve learned from history: You never know.

“There was not much reason to be optimistic in 1988 and in one year things changed very quickly.

“That’s the significance of dissidents and of opposition in any democratic regime.

“And you never know. Because populism always fails. There’s not a single case in human history where populism was successful.

“So if it’s going to be tried, it will fail. And then there has to be another alternative. Not another populist regime. Not a military coup, obviously.

“There has to be a group of members of the elite who are intellectually ready to take power and have plans that they can state clearly and in a way that people can understand.”