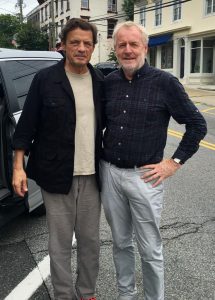 The conversation will cover their common work in the field of art and human rights which began in 2003 when Peter designed the poster for the inaugural Ambassador of Conscience Award presented to Vaclav Havel in Dublin in November 2003. Mr. Shipsey was the initiator of the Peter Sis designed tapestry tribute to Vaclav Havel at Vaclav Havel Airport in Prague. Since that first tapestry, Peter designed a total of eleven other tapestries for Art for Amnesty and Amnesty International honouring, among others, Nelson Mandela, Martin Luther King, poet Seamus Heaney and singer John Lennon. In addition, Peter designed two large ‘azulejo’ murals. One, ‘Simorg’, an image from his book The Conference of the Birds which is located in Lisbon and a giant, almost 300 square metre, mural ‘Velvet Bridge’ which is awaiting installation on a wall in Prague’s Mala Strana later this year.

They will also introduce Peter’s latest book NICKY & VERA A Quiet Hero of the Holocaust and the Children He Rescued. In this distinctive and deeply personal picture book, Peter Sis weaves together the experiences of Nicholas Winton who saved the lives of almost 700 children trapped in Nazi-occupied Czechoslovakia and the story of one of the children he saved, Vera Gissing. The book was published by W.W. Norton & Company in January 2021.

“I was always looking up to the celebrated adventurers, explorers, inventors and dreamers. But I had not paid enough attention to the reluctant and quiet heroes,” Peter Sis writes.

Peter Sis is an internationally acclaimed illustrator, author, and filmmaker. He was born in Brno, Czechoslovakia, and attended the Academy of Applied Arts in Prague and the Royal College of Art in London. Sis’s books, Starry Messenger: Galileo Galilei, Tibet Through the Red Box, and The Wall: Growing Up Behind the Iron Curtain were each named Caldecott Honor Books by the American Library Association, and The Wall also was awarded the Robert F. Sibert Medal for the most distinguished informational book for young readers. In addition, he has had seven books named to The New York Times Best Illustrated Book of the Year list, was the first children’s book illustrator to win the MacArthur Fellowship, and in 2012 won the Hans Christian Andersen Award for lifelong achievement, the highest international recognition given to an author and an illustrator of children’s books.

Bill Shipsey has been a human rights activist and barrister for nearly 40 years. Apart from being the founder of Art for Amnesty and co-founder of Art 19, he initiated and produced Amnesty’s ‘Ambassador of Conscience’ Award – an accolade that has been bestowed on, among others, Nelson Mandela, Vaclav Havel, Mary Robinson, Peter Gabriel, U2, Joan Baez, Ai Wei Wei and most recently Greta Thunberg. He has promoted and arranged for several ‘Havel’s Places’ benches to be installed in Dublin, Barcelona, Venice, The Hague, Lisbon and Ljubljana – an installation comprised of a Czech national Linden tree surrounded by a circular table with a seating area to encourage democratic discussion designed by the Czech architect, and friend of Vaclav Havel, Bosek Sipek. Thanks to Mr. Shipsey several casts of a specially commissioned bust of Vaclav Havel by Czech sculptor Marie Seborova were created and has been unveiled at Ireland’s parliament in Dublin, The European Parliament in Strasbourg, Tlatelolco University Cultural Center in Mexico City, Columbia University in New York and the University of Manitoba in Canada. Two further casts of the bust will be created and dedicated in Bratislava, Slovakia, and in Prague later this year.

The conversation will be live on ZOOM. RSVP through Eventbrite to receive a Zoom link. It will be recorded and available on YouTube.

The discussion is part of HAVEL CONVERSATIONS ON ZOOM.

What is the future of democracy in the post-pandemic world?
Havel Conversations on Zoom, winter – spring 2021

“Today’s world, as we all know, is faced with multiple threats. From whichever angle I look at this menace, I always come to the conclusion that salvation can only come through a profound awakening of man to his own personal responsibility, which is at the same time a global responsibility.”
Vaclav Havel, The Onassis Prize for Man and Mankind, Athens, 1993

This event is organized by Vaclav Havel Library Foundation with support of Bohemian Benevolent and Literary Association.