The National Book Award–winning and bestselling author of Let the Great World Spin, Colum McCann, will introduce his latest epic novel Apeirogon and the global network Narrative 4 in discussion with Harvard lecturer in Slavic languages and literatures, Veronika Tuckerova

Colum McCann’s most ambitious work to date, Apeirogon – named for a shape with a countably infinite number of sides – is a tour de force concerning friendship, love, loss, and belonging. Bassam Aramin is Palestinian. Rami Elhanan is Israeli. They inhabit a world of conflict that colors every aspect of their lives, from the roads they are allowed to drive on to the schools their children attend to the checkpoints, both physical and emotional, they must negotiate. 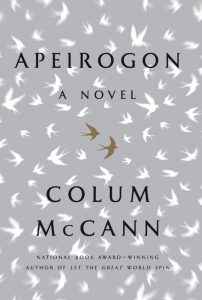 This extraordinary novel is the fruit of a seed planted when the novelist Colum McCann met the real Bassam and Rami on a trip with the non-profit organization Narrative 4. McCann was moved by their willingness to share their stories with the world, by their hope that if they could see themselves in one another, perhaps others could too.

Colum McCann is the author of seven novels and three collections of stories. Born and raised in Dublin, Ireland, he has been the recipient of many international honours, including the National Book Award, the International Dublin Impac Prize, a Chevalier des Arts et Lettres from the French government, election to the Irish arts academy, several European awards, the 2010 Best Foreign Novel Award in China, and an Oscar nomination. In 2017 he was elected to the American Academy of Arts. His work has been published in over 40 languages. He is the co-founder of the non-profit global story exchange organization, Narrative 4, and he teaches at the MFA program in Hunter College. He lives in New York with his wife, Allison, and their family.

The territory of McCann’s work is international in scope and geography – his topics have ranged from homeless people in the subway tunnels of New York, to the Troubles in Northern Ireland, to the effects of 9/11, to a poetic examination of the life and culture of the Roma in Europe. He is known as a writer of style and substance, hailed by critics and readers alike. McCann has been recognized as a “literary risk-taker,” a writer who is known to tackle the dark in order to get through to the light – “any sort of light, however compromised” – on the far side.

Veronika Tuckerova is a literary scholar, art critic, and translator. She has been teaching at Harvard University’s Slavic Department since 2013. She grew up in Prague and studied at the Graduate Center of the City University of New York and at Columbia University. Her interests include Czech and German literature, art and literature of dissent and underground, visual studies, and translation theory and practice. She is currently completing a book on Franz Kafka’s reception in Czechoslovakia during communism.

She published in journals such as New German Critique, The Journal of World Literature, and the Harvard Review. She edited and co-translated the first bilingual English edition of the poetry of Ivan Blatný The Drug of Art, which received several awards. She collaborated on two major exhibitions held in Prague on art and dissent. She is a long-term contributor to the Prague based journal Revolver Revue and the monthly Roš chodeš. In addition to Prague and New York, she lived in Northern Ireland and Austin, Texas; currently she lives in Massachusetts with her Israeli-born husband, and daughter.

“The one true democracy we have is storytelling. It goes across borders, boundaries, genders, wealth, race — everyone has a story to tell.”
– Cofounder & President of Narrative 4, Colum McCann

The lecture will be presented live online on ZOOM. RSVP through Eventbrite to receive a Zoom link. It will be recorded and available on YouTube.

The discussion is part of HAVEL CONVERSATIONS ON ZOOM.

What is the future of democracy in the post-pandemic world?
Havel Conversations on Zoom, winter – spring 2021

“Today’s world, as we all know, is faced with multiple threats. From whichever angle I look at this menace, I always come to the conclusion that salvation can only come through a profound awakening of man to his own personal responsibility, which is at the same time a global responsibility.”
Vaclav Havel, The Onassis Prize for Man and Mankind, Athens, 1993

This event is organized by Vaclav Havel Library Foundation with support of Bohemian Benevolent and Literary Association.