Journalist, political analyst, Eastern and Southeastern European correspondent for the U.S. radio station Voice of America from 1980-2003, thinks back on his meetings with Vaclav Havel as well as other crucial moments of the late 1980s and early 1990s. 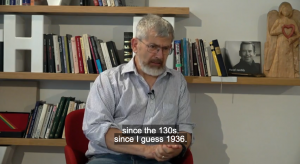 The Voice of America broadcasting received accreditation through the U.S. Embassy during the mission of Ambassador Luers. His mission was a time of numerous gatherings of American visitors and Czechoslovak unofficial culture at the U.S. residency in Prague.

Jolyon remembers his first interview with Havel in May 1986 arranged by Zdenek Urbanek, Havel’ best friend, on the occasion of Havel being awarded the Erasmus of Rotterdam Prize; he talks about the funeral of Jaroslav Seifert in 1986; and more interviews in Havel’s apartment on the Vltava embankment when they talked about human rights, political trials, and staging of Havel’s plays in Vienna.

He comments on the events of 1898 that led to the Velvet Revolution and Havel’s inauguration. Jolyon accompanied Havel on his first trip to the U.S. and interviewed him on the plane from Toronto to Washington, DC. He reflects on how Havel’s social and political development from dissident into an international politician and celebrity and how he continued to be involved in the advocacy of human rights. He describes Havel as a once-in-a-generation political miracle.