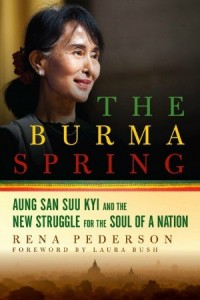 Aung San Suu Kyi won the Nobel Peace Prize in 1991 for her attempts to bring democracy to Burma. Now a member of Parliament in her country, she continues her pursuit of freedom for Burma.

In her new book, “The Burma Spring,” journalist Rena Pederson captures Aung San Suu Kyi’s unexpected odyssey into a political leader who is fighting for the soul of her nation. With a foreword by former First Lady Laura Bush, “The Burma Spring” also details the conditions under which the people of Burma have lived.

In this interview, the Bush Institute spoke with Pederson, who has served as editorial page editor of the Dallas Morning News, a State Department speechwriter, and on the board of the Pulitzer Prize, about her research and her views on Burma. The Bush Institute’s Liberty and Leadership Forum helps prepare young democracy activists for leadership roles in this important Asian country.

You write that the more you witnessed the oppression and poverty of the people of Burma, the more you realized how extraordinary Aung San Suu Kyi was for standing up to the regime at the time on their behalf. What did you mean by that?

As I traveled around the country, from the China border in the north to the Delta region in the south, I could see how millions of people were being held prisoners in their own country.  While the generals and their business cronies lived in villas with deluxe furnishings, the vast majority of the people lived on little more than a dollar a day, without running water, electricity, modern medical care.

If they protested, they were arrested, tortured, their lands seized. You could be arrested for telling a joke critical of the military rulers or having a fax machine.

Aung San Suu Kyi essentially gave up her secure life in England to speak up for the powerless — and risked her life countless times to do so.

You write that, after Suu Kyi returned to Burma in the late 1980s: “The more speeches she gave, the more Suu Kyi’s message evolved into a new formula: spiritual renewal + political renewal = freedom.” Why was that?

People were so oppressed and beaten down, that when Aung San Suu Kyi traveled to villages where people had never had the opportunity to vote, she had to explain to them that it was possible to choose their government with democracy, rather than have it imposed on them. She had to persuade people that democracy was not something tied to their former British colonial rulers, but something that would bring them a voice in their own futures, which they had never experienced before.

At the same time, corruption had multiplied under military rule, as it often does in totalitarian countries. To get anything done, you had to slip officials some “tea money.” Burma is often listed as one of the most corrupt counties in the world to do business in.

Suu Kyi would call in her speeches for people to “be noble” and return to the virtues they had honored in the past — honesty, duty, integrity, altruism, morals, manners.  Some people saw democracy as a modern threat to their ancient Buddhist beliefs, so she also had to convince them that democracy and human rights were perfectly compatible with Buddhist beliefs of compassion and right living.

In sum, she had to be teacher and vicar as well as a political leader.

Unless the Constitution is amended, Suu Kyi will not be allowed to run for president later this year.  Will this sideline her?  Can she be an effective leader without being president?

The odds are not good that Suu Kyi will get to run for president in the general elections this year.  In order for Suu Kyi to become president, Article 59f in the military-rigged Constitution, among others, will have to be changed.

Article 59f bars anyone with a foreign spouse or children holding a passport from another country from holding a leadership position, effectively ruling out Suu Kyi because she was married to a British professor and her children live abroad.

Getting that restriction changed is highly difficult because military officers in uniform hold 25 percent of the seats in Parliament. Since it takes 75 percent approval to change the Constitution, the military has a fail-safe that blocks change.

However, new proposals to change the Constitution were introduced in Parliament as recently as a few days ago. The U.S. should keep up the pressure for true reform. What is in place now is a faux democracy.

That said, Suu Kyi does currently hold a seat in Parliament and is head of the leading pro-democracy party, the National League for Democracy, which gives her a considerable platform. Her party is expected to sweep the elections later this fall if they are free and fair, which may not be the case because — guess what? — the military controls the election commission.

If Suu Kyi’s party gains more seats despite the obstacles, they could forge coalitions in Parliament to change parts of the constitution. Or, some speculate Suu Kyi could become Speaker of the House.

Despite all those hurdles, Suu Kyi continues to campaign quite boldly for greater reforms. She continues to call for six-party talks with the government to pursue changes, even though the current President, a former general named Thein Sein, keeps finding ways to thwart meaningful talks. Rather amazingly, Suu Kyi seems undaunted.

What do you see happening in terms of a successor generation for Suu Kyi?

It has been a problem for the NLD that it has been dominated for years by “uncles” in their 70s and 80s. Suu Kyi has been actively trying to involve more young people in the democracy movement, speaking at youth rallies and establishing an NLD Youth Congress.

She also has encouraged more women to run in the last election, such as Phyu Phyu Thein, who established an AIDS hospice in Rangoon. In addition, Suu Kyi has encouraged former political prisoners to get leadership training — such as Zin Mar Aung, who was held in solitary confinement for ten years for distributing poetry with a political message when she was in college. Zin Mar has attended leadership classes at Stanford and in Washington D. C. and is a very capable young woman.

Khin Lay, another very impressive NLD member, has been helping bring women’s groups together in a coalition to press for change. Another younger NLD member, Nay Phone Latt, was a blogger who was arrested for helping the western media cover the brutal crackdown of monks in 2007.  He now is training young writers and helped establish a chapter of the international PEN press freedom group in Burma.

But there are also others reaching out to the new generation — in fact the Bush Center has started a Youth Leadership program that launched last summer with 18 younger Burmese who represent different regions, different religions and different parties. They were all very bright and committed to rebuilding their country.

What are the biggest differences you see in traveling to Burma before the opening and after the opening? For example, what did you see in stores? How did people act?

The changes after March 2011 were stunning.

The first time I visited in 2003, there were soldiers on most corners. You could not get a taxi driver to drive you by Aung San Suu Kyi’s house, they were so afraid of being arrested. The only goods in the stores were poor quality imports from China.  Cell phone usage was almost non-existent. You had to go to the hotel office to send an email message on the internet and, of course, all messages were snooped on.  People could not even say Aung San Suu Kyi’s name out loud.

After the beginning of “the Burma Spring,” you could buy Aung San Suu Kyi’s photo in the market. The military presence was less in urban areas, although heavy fighting has continued in ethnic regions. The Gap is now producing clothes in Burma. Coca-Cola is expanding in the country and so are Ford and MasterCard and Hilton hotels.  You can use Wi-Fi in most hotels now and rent cell phones. It’s still difficult to get western newspapers, but more local publications have been allowed. Kentucky Fried Chicken is opening franchises and Starbucks is looking seriously at operations there.

People were less guarded and more optimistic in 2012-2013 when it appeared the reforms were serious, but now that reforms have stalled, people are apprehensive again.  Even though there is more commercial activity — 500 companies have invested more than $50 billion there – corruption is still rampant.  Journalists are still being arrested and one was beaten to death. People who protest land seizures also are arrested. Sexual violence by the military against ethnic women is still a tragic problem.

A prime example: two young ethnic Kachin teachers were recently raped and murdered.  The government has threatened to file a libel suit against anyone who accuses the military of complicity. There appears to be some evidence that soldiers were indeed involved in the assaults, so I guess I’m in trouble for saying that. And maybe you, too. That’s what happens.

That’s a good question. You could also add Lech Walesa in Poland. So yes, I think history does often raise up brave individuals to articulate the hopes of many. You don’t see statues in town squares to committees.  Burma has been fortunate to have someone in the wings such as Aung San Suu Kyi, who is extremely articulate and photogenic and dutiful.  She has made Burma legible to the world.

Vaclav Havel Library Foundation · 1 day ago
@HavelLibrary
Save the date‼️ @bblanewyork and VHLF invites you to #NYC to our 2022 Annual Gala with guest of honor Peter Sis – renowned Czech-American author and illustrator of children’s books. It's about DREAMS... More info: https://t.co/pkxrLldePP.

Vaclav Havel Library Foundation · 7 days ago
@HavelLibrary
Burmese activist Ma Thida: 🙏 We, the recipients of the Disturbing the Peace Award, are whole-heartedly disturbed by Russian forces against #Ukraine. We are united in support of Ukraine citizens' determined resistance: https://t.co/ldcVFeg3qC.
#vaclavhavel #supportukraine #truth https://t.co/k2o5VGuOxW
View on Twitter
1
1