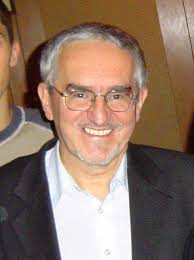 In the late 1960s, he was a writer and editor for several student newspapers that advocated reforms in communist Czechoslovakia.  After the August 1968 Soviet invasion ended the Prague Spring period of liberalization, Martin worked as a sociologist and therapist, continuing to write for underground publications.  In his interview, he talks about the stifling conditions in Czechoslovakia in the 1970s.  When government agents asked him to sign a petition denouncing Charter 77, a grassroots movement calling on the state to respect human rights, Martin refused.  “There’s a moment when someone says ‘enough.’”

In the late 1980s, cracks began to appear in the Soviet domination of Central Europe.  Martin and other dissidents began to mobilize.  Speaking of Mikhail Gorbachev and the opening of greater political space, Martin said, “Gorbachev was part of the those external factors that helped people grow in their awareness and that somehow started to change the environment, so that people dared a little bit more, that the people said that how this country lives, how this country is run, does not match what we want, it does not match the potential of Czechoslovakia.  Czechoslovakia is capable of more, we are capable of more, we don’t want to live like this anymore.”

In November 1989, Martin was one of the cofounders of Public Against Violence, a Slovak civic political and movement.  Along with its Czech counterpart Civic Forum, Public Against Violence organized the peaceful mass demonstrations that brought down Czechoslovakia’s communist regime in what became known as the Velvet Revolution.  In a manner of weeks, Martin was transformed from a dissident protesting a seemingly invulnerable regime to being the Human Rights Advisor to the new president – Vaclav Havel.  “I had to pinch myself to see if it was really true that Vaclav Havel was the president,” Martin recalled.

Following the 1993 division of the country into the Czech Republic and Slovakia, Martin turned his attention to teaching and civil society.  In 1997, he founded a think tank.  He was a leader in Slovak civil society’s efforts to defeat autocratic Prime Minister Vladimir Meciar in the 1998 parliamentary elections.  The civil society voter education and motivation campaigns helped convince nearly 85 percent of eligible citizens to vote and secured a majority for a democratic and pro-reform government.

From 1999 to 2003, he served as Slovakia’s Ambassador to the United States, where he played a key role in securing his country’s membership in NATO.  He ran as an independent candidate in Slovakia’s 2004 presidential elections.

Learn more about how nonviolent action by civil society can bring down autocratic regimes.

Lindsay Lloyd is Program Director of the Freedom Collection