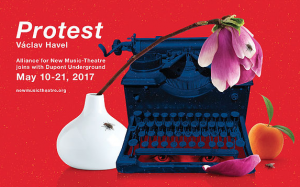 As part of Václav Havel’s 80th anniversary year, Alliance for New Music-Theatre and Dupont Underground join to present a “Vaněk” play – Protest – by the playwright, activist, political prisoner, and president of the former Czechoslovakia and then the Czech Republic, Václav Havel.

The production is designed to acknowledge the courage and the camaraderie that conjoined in the original stagings, called “apartment performances.” Havel and other publicly banned artists forced to go underground with their work used this radical solution to share their works with audiences via private living room performances.  The productions were known for their intimacy, their sly in-jokes about notable Czech artists (including Havel himself taking on the role of Vaněk,) and their tongue-in-cheek pokes at the Soviet-controlled country. Havel’s “Vaněk” became a kind of alter-ego or at least a much-beloved symbol of a counter-culture that later would bring about a bloodless “Velvet” Revolution. Many other playwrights, including Pavel Kohout and Tom Stoppard, modeled plays on the Vaněk -as-Everyman character.

In Protest, Vaněk pays a visit to the lavish home of a former colleague, Staněk, who has invited the renowned activist to help him secure the release of a jailed radical musician, fiancée to his daughter. Vaněk also has a favor to request, getting the influential man’s signature in a far-reaching protest, and the play exposes the power of a society that spies on its citizens and the thin line between acquiescence and culpability and between absurdist comedy and creepy terror.

Last summer, the Embassy of the Czech Republic commissioned the Alliance to produce a short Havel play to mark Havel’s 80th birthday celebration. The Alliance production of Protest was presented in three special performances – at Ambassador Gandalovič’s residence for a special Czech Government delegation that included Havel’s widow, at the President Woodrow Wilson House to mark the long standing admiration of the Czechs for President Wilson and how he greatly influenced the formation of the new Czechoslovakia as a democracy after World War I, and at the Czech Cultural Center in New York City.

Protest marks the fourth time the Alliance has been honored to partner and play a key part in celebrations with the Czech Embassy.  In 2013, the Czech Embassy invited the Alliance to be part of their Mutual Inspirations Festival where the company presented a Havel double bill of Antiwords (Audience) with Miřenka Čechová and Čechova’s direction of Unveiling. In 2014 Alliance produced its own original take on Vaněk with its music-theatre confection, Vaněk Unleashed, composed by Maurice Saylor, and presented the work with Unveiling for performances in D.C. before taking the works to the Prague Fringe Festival. Both shows were enthusiastically received, and Susan was nominated for both best actress (Unveiling) and best director/creative originality (Vaněk Unleashed.)

Following performances at Dupont Undergound, the Alliance has been invited again to bring Protest to the prestigious Prague Fringe Festival in late May.