Mad Cat continues its 17th season with a production of two of Vaclav Havel’s sharp political dramas AUDIENCE and PROTEST. The subversive Czechoslovakian playwright, Prime Minister & President, Vaclav Havel was a in danger of being declared a “social parasite” by the neo-Stalinist regime of Gustav Husák when he wrote AUDIENCE & PROTEST back in 1975 & 1978. His plays had been banned and, in the time of the Czechoslovak Socialist Republic of 1974, writers faced imprisonment if they did not have a stamp in the employment box of their Citizen Identification passport. Havel solved this problem by finding a job as a brewery hand. 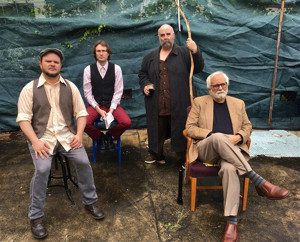 Havel rolled barrels in the basement of a regional brewery in Trutnov and the experience profoundly changed his writing. His work in the brewery suddenly gave him back the refreshing existential perspective “from below, from where the absurd and grotesque dimensions of the world are always more plainly visible.” And then an incident occurred on the job that gave him the inspirational seed for what is his best loved, and arguably finest, play, AUDIENCE. Havel claimed the piece was written quickly and easily “from the hip,” opening up a new way of working in the theater for Havel – writing his first autobiographical play.

AUDIENCE features for the first time the character of Van?k, a former playwright and an awkward and slightly comical figure that is undoubtedly Havel’s self-portrait. AUDIENCE and PROTEST are parts one and three of a triptych called The Vanek plays, that aim to sum up the moral dilemmas of the Czechoslovak life of that era. The Van?k plays were quickly recognized and produced abroad, in theaters all over the world, giving Havel an official source of income. He was no longer being prosecuted as a “social parasite,” and was able to quit the brewery where his shift began at four o’clock in the morning to earn his inspiration in the sweat of his brow.

Havel has been a key figure in Czech public life for the past half century. As one of Czechoslovakia’s leading dissident intellectuals, he became the president of the country’s first post-Communist government. After the failure of the ‘Prague Spring’ in 1968 – when revolutionaries tried to overthrow the Communist regime, only to be beaten into submission by the Soviet military – Havel became a notorious political dissident and formed the forefront of the intellectual renaissance of the country that gave us Franz Kafka and Milan Kundera, amongst others.

Havel’s political philosophy was one of anti-consumerism, humanitarianism, environmentalism, civil activism, and direct democracy. He supported the Czech Green Party from 2004 until his death. He received numerous accolades during his lifetime including the Presidential Medal of Freedom, the Gandhi Peace Prize, the Philadelphia Liberty Medal, the Order of Canada, the Four Freedoms Award, the Ambassador of Conscience Award, and the Hanno R. Ellenbogen Citizenship Award.

Havel’s play AUDIENCE deals with the travails of Havel’s alter-ego Ferdinand Vanek – recently released from jail for anti-government activities. Valek is stuck in the bleak office of the foreman of the brewery where he has been forced into menial labour. The tedious bureaucracy and constant paranoia of life under the Communists have driven the foreman to alcoholism and to the brink of insanity – where he is prone to bouts of rage and despair. In PROTEST, Havel’s alter ego Ferdinand Valek has escaped his hellish office to visit the middle-class home of one of his friends. He is hoping to convince his old friend Stanek to sign a petition renouncing the regime.

Both plays seek to shine a light on the darkness of censorship and tyrannical rule.

PROTEST is directed by Paul Tei

AUDIENCE is directed by Theo Reyna

The design team for PROTEST & AUDIENCE:

Students, seniors and industry tickets (Thursday and Sunday ONLY) $15

Tickets may be purchased online at www.madcattheatre.org, www.mtcmiami.org, or by MTC box office phone number: 305-751-9550.