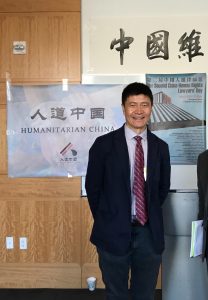 The highlight of the event will be the unveiling of a bronze bust of Chinese writer, literary critic, human rights activist, philosopher, Nobel Peace Prize laureate and co- founder of Charter 08, Liu Xiaobo who died in custody in July 2017 having spent the previous nine years in prison in China for his human rights activism.

In attendance for the event will be his widow, poet and artist Liu Xia, who spent eight years under house arrest. Amnesty International had been campaigning for release of them both for many years.

Several other prominent Chinese dissidents and former Tiananmen Square leaders in exile including Fengsuo Zhao and Professor Xu Youyu will be present at the event.

The event and exhibition of the bust (and accompanying photographs of Liu Xia) is being held to coincide with the Anniversary of the beginning of the Tiananmen Square protests on April 15th 1989 (seven months before the Velvet Revolution) in which Liu Xiaobo was a prominent leader.

On the 15th April 1989 Chinese students occupied Beijing’s Tiananmen Square.  The students called for democracy, greater accountability, freedom of the press, and freedom of speech. At the height of the protests almost one million people assembled in the square including Liu Xiaobo who returned from teaching in the U.S. to join the protests.

On June 4th 1989 the Chinese Government suppressed the protests with tanks and by firing at demonstrators with automatic weapons, killing as many as (a government estimated) 10,000.

Liu Xiaobo was arrested after the Tiananmen Square protests and was imprisoned for his activism from 1989 to 1991, 1995 to 1996 and again from 1996 to 1999 and finally from 2008 until his death in custody in July 2017. He was the first Nobel Peace Prize Laureate to die in prison since German pacifist Carl von Ossietzky, the 1935 recipient, died under surveillance after years confined to Nazi concentration camps.

The bronze bust, commissioned by Humanitarian China and Art for Amnesty, was created by leading Czech sculptor Marie Seborova, who for example created the bust of Vaclav Havel for the European Parliament in Strasbourg or the Columbia University in New York.

Liu Xia’s disturbing and remarkable photographs were previously exhibited in DOX in 2014. This will be the first time that she has seen her photographs exhibited. Amnesty International actively campaigned for her release from house arrest.

Liu Xia will not be giving interviews during the event but she will be present for the dedication and unveiling of the bust of her late husband.