Martin Palouš will discuss the Czech-Cuban relationship inspired by the Czech experience with totalitarianism at the EU Delegation on March 29, 2017, at 6 pm.

Solidarity with other “affected” groups is a necessary component for defending human freedom and democracy in the contemporary world. 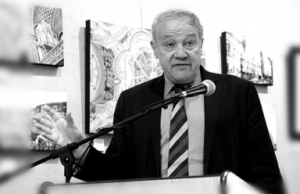 Music, especially rock music, plays a crucial role in the fight against totalitarian regimes particularly because the hope of this world depends on the young generation not being “normalized.” The discussion will include the screening of a short documentary, “The Unfinished Dialogue,” featuring Václav Havel and Oswaldo Paya.

Martin Palouš was a signatory of Charter 77 and a founding member of the Civic Forum. He was appointed as the Czech Ambassador to the United States (2001-2005), prior to taking office as the Czech Republic’s Permanent Representative to the United Nations (2006-2011). He has also served as Deputy Minister of Foreign Affairs for the Czech Republic, and a member of the Czechoslovak parliament. He is currently director of the Václav Havel Program for Human Rights and Diplomacy at Florida International University and a member of the Prague Society for International Cooperation.

This program is in conjunction with the Embassy of the Czech Republic.

Doors open at 5:45 pm and close promptly at 6:30 pm.
A reception follows the lecture.

RSVP: The event is free, but reservations are required. It is expected to fill up fast.
Click here to register.

Please note that Conversations in Culture events may be filmed or photographed.