“I feel like a mole,” says Susan Galbraith, “emerging from the darkness.” 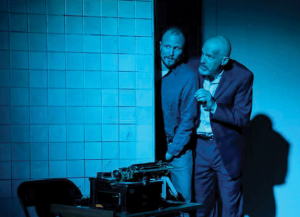 Galbraith is the director of “Protest,” the first play mounted at Dupont Underground, and the cavernous, subterranean space is a fitting home for the Alliance for New Music-Theatre’s production.

Written by Czech playwright Vaclav Havel (who would go on to become president of Czechoslovakia and then the Czech Republic), “Protest” barely saw the light of day at first. In 1978, when Havel wrote it, it was illegal to perform his works in Czechoslovakia, because of his political opposition to the Communist regime then in power. To get around the ban, the two-person play was performed stealthily in private spaces, usually apartments.

“Protest” is about a political activist, Vanek (a recurring character in Havel’s work, largely considered a stand-in for the playwright), who goes to visit a rich former colleague, Stanek, to ask a favor. Stanek also has something he needs from Vanek; as the play goes on, it becomes about whether it’s possible to function in an oppressive society without becoming part of the system.

“It’s my passion to develop things that are site-specific in the sense of ‘What can this space say?’ ” Galbraith says. “Dupont Circle is historically where we bring the conversation up, whether it’s civil rights or women’s rights or gay and lesbian rights. And it’s right at the nexus of what I call the ‘economic corridor’ of Connecticut Avenue and Embassy Row,” an area where the play’s themes of political and economic power take physical forms.

Just because it’s a perfect fit, though, doesn’t mean it was an easy one. “When we first went in there, they didn’t have permits,” Galbraith says. “We weren’t sure how many people we were going to be able to have in there. They had electric circuitry, but pretty minimal. They didn’t have chairs. They didn’t have a stage.”

Now Dupont Underground has everything they need — including a stage that moves along the trolley tracks that used to run through the location — and the space, Galbraith says, has really started speaking.

“This is ultra-intimate,” Galbraith says. For the audiences and the actors, “it’s a feeling of we’re discovering this space together, and that to me is a thrilling aspect of theater. It makes things more alive.”