On February 21 we marked 25 years since Vaclav Havel’s memorable speech to a joint session of the United States Congress. It received seventeen standing ovations.

Havel was the first President of the former communist block to visit the United States after the fall of the Berlin wall. This visit started an extremely powerful chapter of the renewal of Czech-American relations.

We would like to remind you of a few parts that show Havel’s deep respect for the United States and their democratic values as well as his opinions concerning global responsibilities in today’s interconnected world.

PASSAGES FROM THE VACLAV HAVEL’S ADDRESS TO US CONGRESS, FEBRUARY 21, 1990

Twice in the century, the world has been threatened by a catastrophe. Twice this catastrophe was born in Europe, and twice you Americans, along with others, were called upon to save Europe, the whole world and yourselves. The first rescue mission, among other things, provided significant help to us, Czechs and Slovaks. 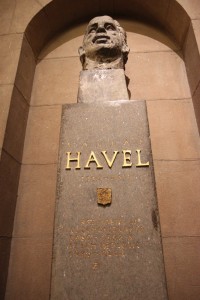 Thanks to the great support of your President (Woodrow) Wilson, our first president, Thomas Garrigue Masaryk, founded our modern independent state. He founded it, as you know, on the same principles on which the United States of America had been founded, as Masaryk’s manuscripts held by the Library of Congress testify.

Helping Soviets on Road to Democracy

I often hear the question: how can the United States of America help us today? My reply is as paradoxical as the whole of my life has been. You can help us most of all if you help the Soviet Union on its irreversible but immensely complicated road to democracy. It is far more complicated than the road open to its former European satellites. You, yourself, know best how to support as rapidly as possible the nonviolent evolution of this enormous multinational body politic toward democracy and autonomy for all of its people. Therefore, it is not fitting for me to offer you any advice.

A Long Way from ‘Family of Man’

This is a subject for books, many of which have already been written and many of which are yet to be written. I shall therefore limit myself to a single idea. The specific experience I’m talking about has given me one great certainty: consciousness precedes being, and not the other way around, as the Marxists claim.

For this reason, the salvation of this human world lies nowhere else than in the human heart, in the human power to reflect, in human meekness and in human responsibility.
…
In other words, we still don’t know how to put morality ahead of politics, science and economics. We are still incapable of understanding that the only genuine backbone of all our actions, if they are to be moral, is responsibility.
Responsibility to something higher than my family, my country, my company, my success–responsibility to the order of being where all our actions are indelibly recorded and where and only where they will be properly judged.
The interpreter or mediator between us and this higher authority is what is traditionally referred to as human conscience.

If I subordinate my political behavior to this imperative, mediated to me by my conscience, I can’t go far wrong. If, on the contrary, I were not guided by this voice, not even 10 presidential schools with 2,000 of the best political scientists in the world could help me.

This is why I ultimately decided, after resisting for a long time, to accept the burden of political responsibility.

I am not the first, nor will I be the last, intellectual to do this. On the contrary, my feeling is that there will be more and more of them all the time. If the hope of the world lies in human consciousness, then it is obvious that intellectuals cannot go on forever avoiding their share of responsibility for the world and hiding their distaste for politics under an alleged need to be independent.
It is easy to have independence in your program and then leave others to carry that program out. If everyone thought that way, pretty soon no one would be independent.