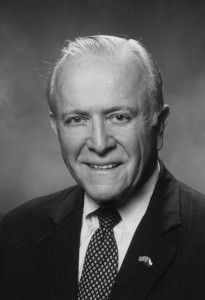 William J. Cabaniss Jr. served as U.S. Ambassador to the Czech Republic from 2004 to 2006. Prior to that, he represented his home districts as a Republican in the Alabama House and Senate from 1978 to 1990. A small business owner, Mr. Cabaniss was a pro-business legislator and advocated raising the ethical standards for political officeholders and statewide governmental employees. During his service in the Czech Republic he met regularly with officials of the American Chamber of Commerce in Prague to encourage trade between the United States and the Czech Republic. He also developed a sister-city relationship between Birmingham and the Czech town of Pilsen.

Mr. Cabaniss has been a leader in the Birmingham business community. He began his business career with the Southern Cement Company Division of the Martin Marietta Corporation. In 1971 he acquired the assets of a small metal grinding company. Since then, he built Precision Grinding, Inc. into a successful steel plate processing and metal machining business. He sold Precision Grinding to his partners in October of 2006. He has served on the board of directors of many companies including AmSouth Bank, Birmingham Steel Corporation, the Southern Company, and Protective Life Corporation. In community affairs, Mr. Cabaniss has served on the Boards A+ (The Coalition for Better Education), Kings Ranch (a residential ministry for neglected women and children), the Boy Scouts, and others. In 2004 Ambassador Cabaniss was inducted into the Alabama Academy of Honor.Ambassador Cabaniss is married to the former Catherine Hood Caldwell, and they have two daughters and five grandchildren.