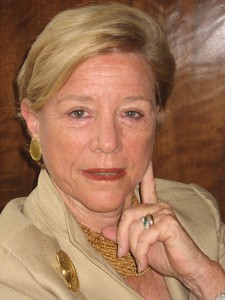 Wendy W. Luers is the founding President of The Foundation for a Civil Society (FCS) and Co-Chair of the Project on Justice in Times of Transition. She established FCS in New York and Prague in January 1990 at the request of the Czechoslovaks and Americans following her residence in Prague with her husband, Ambassador William Luers from 1983 to 1986 when they became close to Vaclav Havel and Charter 77. FCS helped promote civil society and provided advice and expertise with offices in New York and Prague from 1990 through 1999, and in Bratislava, Slovakia from 1993 through 1999. Nadace Via (Czech Republic) and NadacePontis (Slovakia) are the successor NGO’s and affiliates of the Foundation for a Civil Society. FCS’s principal activity today is the Young Visual Artists Awards established in 1989 as the Chalupecky Award in Czechoslovakia. It has inspired similar awards in nine other countries, the winners of which come to New York for residencies.

Mrs. Luers serves on numerous boards, including those at Stanford, Tufts and the University of Southern California. She is Vice Chair of the Latin American Program at the Woodrow Wilson Center for international Scholars. She was the first woman and first non-Czech to receive the GratiasAgit Award from the Minister of Foreign Affairs of the Czech Republic and she was decorated with the Double White Cross by Slovakian President Michal Kovac. A graduate of Stanford, she is a member of the Council on Foreign Relations and founder and President Emerita of the Foundation for Art and Preservation in Embassies.