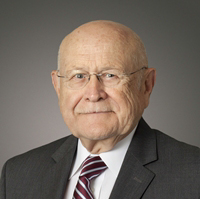 Milton Cerny was born in Cicero, Illinois, in the family of Czech immigrants. As former President of the American Friends of the Czech Republic (AFoCR), Milton guided the organization’s important programs that promote Czech and United States relations. He helped organize and create the AFoCR in 1995 and led the effort to gain public support and congressional action for the successful inclusion of the Czech Republic into NATO membership. He was instrumental in the placing of the T. G. Masaryk memorial on Embassy Row in Washington, DC and raised over $350,000 for relief of Czech communities suffering from the floods of 2002. Mr. Cerny played a key role in the placement of the Vaclav Havel Bust at the U.S. Capitol Building in November 2014. He first met Vaclav Havel in 1992 when representing the U.S. Treasury Department in the Czech Republic, advising the Ministry of Finance on reforming nonprofit tax laws. He met and worked with Havel numerous times; on Havel’s final trip to the United States, he presented Mr. Cerny with the Gold Medal for distinguished and meritorious service to the Czech Republic.

Mr. Cerny has a distinguished record of professional accomplishments, headed by an extensive list of publications in the exempt organizations field. He was a Partner at Caplin and Drysdale and Counsel at McGuireWoods, leading American law firms. He represents a broad range of US nonprofit organizations as well as a number of Czech nonprofit and business organizations. Mr. Cerny is a well-known lecturer on the nonprofit sector, has authored over 400 articles, and taught tax law at major law schools including the University of Richmond School of Law and the American University Washington College of Law.