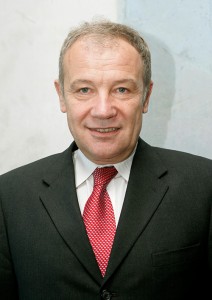 Martin Palous was one of the first signatories of Charter 77, a document criticizing the Communist government of Czechoslovakia for not respecting human rights and later served as the group’s spokesman. He also is a founding member of Civic Forum, a dissident movement that helped overthrow the Communist government in Czechoslovakia.He was elected to the Federal Assembly where he joined the Foreign Affairs Committee and later became deputy minister of Foreign Affairs. In 2002, he was appointed Ambassador for the Czech Republic to the United States, and in 2006, became the ambassador of the Czech Republic to the United Nations.Currently Mr. Palous is the Director of the Vaclav Havel Initiative for Human Rights and Diplomacy at the Florida International University. The Initiative studies and explores the politics of human rights, the processes of democratization in societies that were once under autocratic governments, and the experiences of societies currently in transition around the world.

Mr. Palous focuses on the process of negotiation of a new bilateral treaty between the European Union and Cuba, and campaigns and advocates human rights requiring the participation of representatives of independent Cuban civil society in all the stages of this process. As a senior SIPA fellow, he teaches classes on democratization, human rights, Europe, and the European Union.Martin Palous studied Natural Science, Philosophy and International Law. He has lectured at many universities in the Czech Republic and in the United States and is the author of numerous publications in the area of political philosophy, international relations, and international law.