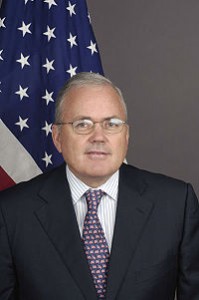 Craig Stapleton is the former U.S. Ambassador to the Czech Republic and currently serves as a Senior Advisor to Stone Point Capital in Greenwich, Connecticut; Lead Director on the Board of Abercrombie and Fitch; and a member of the boards of Carlile Bank and Flamel Technologies. He also serves as a Trustee of the George W. Bush Library and Foundation and the 9/11 Memorial Foundation. From 2005 to 2009, Craig was the Ambassador to France. In May 2009, President Nicholas Sarkozy named Craig Stapleton a Commandeur of the Legion of Honor. In October 2010, his book Where Liberty Dwells, There is My Country, a story of Twentieth Century American Ambassadors to France, was published.

From 2001 to 2004, Craig served as Ambassador to the Czech Republic. He was awarded the Jan Masaryk Medal for service to the Czech Republic. In 2004, Craig acted as Connecticut State Chairman for the re-election campaign of President Bush. From 1982 to 2001, he was the President of Marsh and McLennan Real Estate Advisors of New York. Under President George H. W. Bush, Craig served on the Board of the Peace Corps. In 2000, he became the Connecticut State Finance chairman of the Bush-Cheney Presidential Campaign. From 1989 to 1998, Craig joined President Bush in the ownership of the Texas Rangers baseball team. He has been a member on the Visiting Committee for Harvard College and the Committee on University Resources and Athletics. Craig received a B.A. (magna cum laude) from Harvard University and his M.B.A. from Harvard Business School. He resides with his wife, Dorothy Walker Stapleton, in Greenwich, Connecticut. The Stapletons have two children and five grandchildren.