The Havel Best Mini-Drama competition, organized by the Theatre Faculty of the Janacek Academy of Music and Performing Arts in Brno and The Vaclav Havel Library Foundation in New York, has a winner. 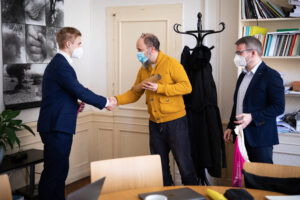 The jury has awarded first place in the competition to It Has to Be Done, written by Josef Nosál, a second-year student of Radio, Television Dramaturgy and Screenwriting. The theme for 2021/22 was a quote from the play Leaving.

With a witty and precisely punchlined monodrama about a school principal who is unable to accept changes to how his institution is run, Nosál has created a psychologically believable character with tragicomic features and subtle ironic humour, which has great potential for theatrical performance. The visually suggestive text is juxtaposed with an imaginary stage action that already on paper invites staging. The playlet from the principal’s office hurtles forward at a dynamic pace, offering a thoughtful depiction of the meeting of old and new worlds that ultimately must collide. It is a skilfully written, ironic, and well graded, to-the-point four-page playlet. 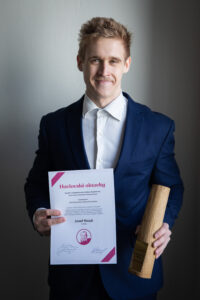 Josef was born in 1999 in Brno, Czech Republic. He attended Secondary Medical School, where he graduated as a laboratory assistant. Afterwards, he studied Media Studies and Journalism at the Faculty of Social Studies in Masaryk University, but after one year he decided to quit his studies and apply to Janáček Academy of Performing Arts. Here, he is currently in his second year of bachelor studies in Radio and TV Dramaturgy and Scriptwriting. The most, he enjoys writing novels. Nevertheless, thanks to his studies he also gets closer to film and theatre creative activities.

The winning drama will be presented in the form of a staged reading at the Salon of Original Works in Brno (11-12 March 2022). The Theatre Faculty will also seek to publish the texts recommended by the jury. The author of the winning text will receive a 14-day study stay in New York City, provided by The Václav Havel Library Foundation.

It Has to Be Done_English translation of the play.

Vaclav Havel Library Foundation · 24 hours ago
@HavelLibrary
In Terezin, a Nazi camp located in the present-day #Czechia, 33,000 people died. We're thrilled to present a program commemorating the creative spirit of the Terezin artists who perished in the Holocaust. "Our Will to Live" on June 13: https://t.co/uLVw4DqIiQ.
#rehearsalfortruth https://t.co/EKCM0LfmMs
View on Twitter
3
3

Vaclav Havel Library Foundation · 3 days ago
@HavelLibrary
Can a #robot write a play that reflects the world in its current state? Find out at the stage reading of a play created fully by a computer⁉️⁠"Permeation," dir. @Maas_Erwin. June 12, RSVP: https://t.co/H07gDulmJ1.
⁠ #nyc #rehearsalfortruth #vaclavhavel #theater #czech #culture https://t.co/1R5zbBy7zQ
View on Twitter
1
2