The Havel Foundation in partnership with the Theatre Faculty of the Academy of Performing Arts in Prague announce that Fedir Kis and Zuzana Sklibova are winners of the annual contest for the best mini-drama. The theme of the 2022 contest was the phenomenon of “leaving”, inspired by Vaclav Havel’s play of the same name.

The winning play entitled Observations and Fictions of František Zouhar sr. was written originally with subtitles as the main autonomous performative language on the theater stage. The text is based on discussions that were taking place at the Theatre Faculty following the public release of anonymous students’ testimonies about the abuse of power by their teachers, discrimination against female students, and sexual harassment.

Zuzana Sklibova is currently finishing her master’s degree at the Department of Alternative and Puppet Theatre, she also studied Theatre at Charles University and spent a year studying Wayang at the Indonesian Institute of the Arts Yogyakarta. She is interested in rhythm and the possibilities of sound, which she explores in relation to speech, language and form. She is also very inspired by urban space, which interests her from a performative, artistic and psychogeographical point of view.

Fedir Kis first studied musicology at Masaryk University in Brno, he is currently finishing graduate studies in the Authorial Acting Program at DAMU. His diploma thesis is on the topic of forms of dialogue. Fedir’s work is trying to find the ways through which entertainment and political topics can help make social connections between people who do not talk to each other in daily life, because of their financial or cultural background. He is interested in scriptwriting, theater of the absurd, dance and activism. 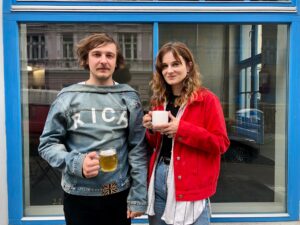 Fedir and Zuzana explore the potential of written text – specifically film subtitles and its performative use. The projects they are working on explore the transitional surfaces between literature, film, theatre, and installation. They see the format as an efficient tool to make political theatre when situations are reduced to mere words, and those words become the main actors.

Zuzana and Fedir are excited to see and experience the New York cultural scene. They look forward to meeting students from Tisch School of the Arts NYU and other artists. During their stay in New York, , they would like to visit venues such as La MaMa, Brooklyn Academy of Music, MoMA, The Watermill Center, The Brick Theater, and The Chelsea Hotel.