We are proud to announce the first winner of our student contest for the best mini-drama from the Janacek Academy of Music and Performing Arts (JAMU) in Brno. Daniela Samsonová has won with her play Racks [Regály] based on a quote from Vaclav Havel’s play Garden Party: “We all are only sort of searching in these tempestuous times for our particular standpoint.” 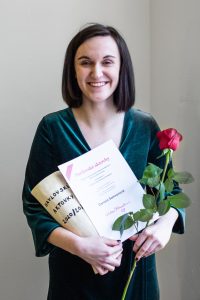 The play Racks is an absurd drama taking place in a future supermarket in a society where everyone is under surveillance, and reason, truth and compassion are seemingly left behind.

Daniela is a sophomore in the Drama Direction program at the Theatre Faculty JAMU. She graduated from a literary high school named after Josef Škvorecký, the famous Czech writer exiled after the Soviet invasion of 1968. While in high school, she successfully auditioned for a newly established ensemble at Švanda Theatre and directed her first play. With the one-actor play called This Is Not Your Karenina, based on the Tolstoy novel, she won the first prize at the Spoleto International Theatre Festival in 2019.

The award includes a two week residency at Barnard College, Columbia University, visits to New York theaters, and other cultural exploration of the city. The play Racks will be presented as a stage reading at the Salonof Original Writings at JAMU on March 5 – 6, 2021.

From the judges:
“The play reflects a Havelian world and at the same time shows in a unique way the image of our near future. Engaged dystopia that simultaneously playfully denies the cliché of engaged dystopia. The play particularly evokes how Czech the current COVID nightmare is – the apocalypse is over, people have accepted it with apathy, they have settled in the postapocalyptic world and got used to it.”