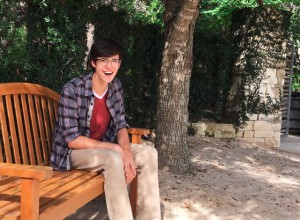 It is honor to present the first winner of the VHLF & DAMU Contest for the US Students of Drama and Performance Studies, Jacob Sampson. Jacob is a senior at The University of North Texas majoring in Radio, TV and Film with a Theatre minor. In high school he was into acting on stage but since he got into college, his interests have shifted more to the behind-the-scenes stuff such as writing, cinematography and directing. Writing scripts is his number one passion. His play, The Essay, shows this as he had, according to international judges, won the competition for the best play on the theme of “PTYDEPE“, the artificial language, of the play The Memorandum written by Vaclav Havel.

The Memorandum is one of Vaclav Havel’s most popular plays. An off ice has adopted a new official language, Ptydepe, in an attempt to make communication more scientific. But the new language may truly be a tool for power. Havel’s play was able to slip by the Communist Czech censors in 1965, despite its veiled political commentary.

Jacob had done a marvelous job in showing his understanding of the play Memorandum and rewriting it in a boarding school context. Maxwell, The Essay`s main character, is a hardworking, overly enthusiastic top student at Eaglebrook Academy, where he is trying to gain the position of a President of the Golden Wings Society. New headmaster introduces Ptydepe at the school and makes new conditions about the essay for the Presidential application being in it. Maxwell unaware of this requirement until the day of the submission struggles to fit the new system. The play shows issues of bureaucracy, corruption and sheepish behavior created by blindly following of the system.

This humorous play had won Jacob a two-week residency in Prague with classes at different DAMU departments, visits to Prague theaters and Havel related institutions, a round-trip air ticket to Prague and accommodation in November 2016.

“Mr. Sampson is a strong writer with a good grasp of Havel’s brand of the absurd. He follows Havel’s Memorandum, and has developed his own script fully. The structure is sound, and the dramatic development is strong.”