Vaclav Havel Library Foundation together with The Theatre Faculty of the Academy of Performing Arts in Prague (DAMU), Tisch School of the Arts at New York University and the Consulate General of the Czech Republic in New York is excited to announce the second recipient of the Vaclav Havel Library Foundation award to a Czech Theater Student. The award was given to Ladislav Karda who is a student at the Academy of Performing Arts in Prague, department of alternative and puppet theatre. Karda’s love for theatre can be seen through his many accomplishments including organizing a theatre festival ʺAber Sometimes Fest” or being part of a Just!Impro and Teapacks groups that focus on theatrical improvisation. 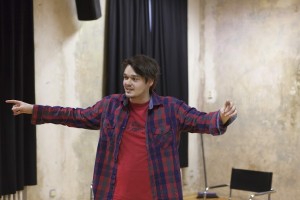 This year’s topic of the theater contest was “PTYDEPE”, the artificial language used in Havel’s play The Memorandum. The jury that consisted of professors from DAMU made their decision after reading the plays anonymously and selected the short play entitled “Strong Tea”. Its author, Ladislav Karda, will come to New York for two weeks in July and will attend a few courses at the Tisch School of the Arts, see selected shows on Broadway, as well as other theatrical performances and festivals taking place in July.