It is an honor to present the U.S. winner of the VHLF & DAMU contest for students of drama and performance studies. Abigail Henkin’s play Personal Speaker was selected as the best submitted short drama based on the quote from the play The Memorandum. 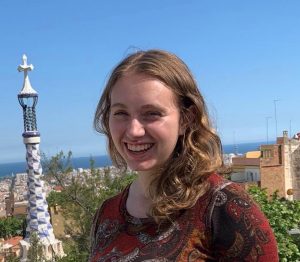 Abigail Henkin is a rising Senior at the University of Chicago, where she studies Theater and Cinema, minoring in Spanish. Her one-act play Decision Day was previously produced as part of the 31st Pegasus Young Playwrights Festival. She also writes for the screen, including writing the short film Property Damage and web series Board to Pieces. She has interned at the Court Theatre, Full Spectrum Features, and Film Independent. Abigail’s work frequently explores tensions between technology and the body, particularly for women, and satirizes social pressures.

The jury members included:
Edward Einhorn, a playwright, director, translator, librettist, and novelist. He is the Artistic Director of the Untitled Theater Company No. 61: A Theater of Ideas, which has been performing in New York City for 25 years.
Jakub Skorpil, a translator, and a non-professional actor and director. Since 2001 he has edited the theatre journal “Svet a divadlo” (World and Theatre).
Jacquelyn Claire de Villiers, a South African award-winning actor, director and playwright now living in New York City.

From the judges’ citation:

Abigail Henkin’s play Personal Speaker is an erudite discourse on the ‘strange, complex epoch’ we are living in at the moment. She exquisitely captured the devastating effects of our inability to communicate effectively and the lengths we go to in order to fit in. Not only did she perfectly acquire the satirical spirit of Vaclav Havel’s The Memorandum, but used his text as a trampoline to catapult into a future bureaucracy where she let her black comedy skills run rampant. While staying true to the brief, she also managed to create well rounded characters engaged in complex relationships in this exceptional short play. She delivered a clever plot line, an astute parody, a gift for performers, a fresh perspective on alienation and a scathing commentary on systems designed to keep people compliant.

As the winner, Abigail will receive a two-week residency in Prague with classes at different departments at the Academy of Performing Arts (DAMU), visits to Prague theatres, and meetings with Havel’s legacy places.